Cedar Crest, Northern Lebanon and Lebanon Catholic open the state girls basketball playoffs this weekend, and have designs on sticking around for a while.

Yes, the Cedar Crest, Northern Lebanon and Lebanon Catholic girls basketball teams have accomplished quite a bit during a memorable 2016-17 local hoops season. So much, in fact, that they don't have to win another game to call this winter a success.

But rest assured, they want more. And this weekend they start chasing it, when the PIAA state playoffs begin.

With that in mind, let's take a closer look at what's in store for the Falcons, Vikings and Beavers when they take the court again.

Cedar Crest vs. North Penn, Class 6A first round

Cedar Crest must look out for: The senior trio of Sam Carangi, Jess Huber, and Irisa Ye, who led North Penn to the top seed in the District One 6A playoffs, before it was upset in the quarterfinals. Carangi, a Villanova recruit, and Huber are 1,000-point scorers, and make the Knights a dangerous group to deal with.

North Penn must look out for: Senior point guard Ariel Jones and senior center Alyssa Austin. If the Falcons are to make a state playoff run, they'll need contributions from everyone, but especially Jones and Austin, who averaged a combined 31 points per game while leading Cedar Crest to the Section 1 and Lancaster-Lebanon League titles.

Breaking it down: The Falcons have the toughest opening round matchup of the county teams by a wide margin. North Penn, as noted above, is a dangerous group with something to prove after falling short in its district tournament, so Cedar Crest must be at its best to advance.

Cedar Crest seemed to be dragging a bit the last three times out, so the week break it's had should serve it well. And playing close to home at Lebanon High also won't hurt, either. 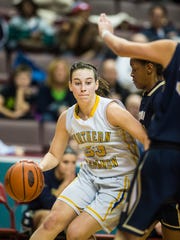 Northern Lebanon's Zoe Zerman drives to the hoop during the PIAA District 3 4A championship at the Giant Center on Friday, March 3, 2017. (Photo: Jeremy Long, GameTimePA.com)

Northern Lebanon vs. Dobbins, Class 4A first round

Northern Lebanon must look out for: Hard to say. Maybe overconfidence? Not a lot is known about Dobbins, from the Philadelphia Public League, other than it last played on Feb. 15 in a 46-16 playoff quarterfinal loss to Central. Just a wild guess, but Northern Lebanon figures to be one of the more focused and tenacious teams Dobbins has faced to date.

Dobbins must look out for: A tight-knit NL group that defends and rebounds like crazy and consistently finds a way to get the job done. Not much else to say about the Vikings that hasn't already been said.

Breaking it down: Like Cedar Crest, the Vikings should benefit from playing at Lebanon High in front of lots of friendly faces. Can't see Northern Lebanon getting tripped up here. It's the last go-round for the senior trio of Zoe Zerman, Megan Brandt and Amber Kintzer and they're going to want to make it last as long as possible.

Lebanon Catholic vs. Galeton, Class 1A first round

Lebanon Catholic must look out for: Galeton has two double-figure scorers in junior guard Makaya Shadle (14.6 ppg) and senior Cortney Parsell (13.6 ppg), although it has not faced the level of competition Lebanon Catholic has.

Galeton must look out for: Um, junior forward Alexis Hill, who's been all over the place the last month or so and averaging 18.6 points per game for the season. If Galeton can't keep Hill under control its appearance in states will be a brief one. Period.

Breaking it down: It's always dangerous to look too far ahead, but on the heels of its 19th 1A district title win last week, Catholic finds itself with a very favorable bracket early in the tourney. Expect them to take advantage of it. Head coach Patti Hower believes the Beavers can make a run at the program's third state championship, and it's hard to argue with that thinking.

With Hill and junior point guard Neesha Pierre leading the way, Catholic is arguably the most athletic and explosive team in the 1A draw. It will take a lot to send it home anytime soon.