You can't have a Lancaster-Lebanon League championship game without the Northern Lebanon girls basketball team. 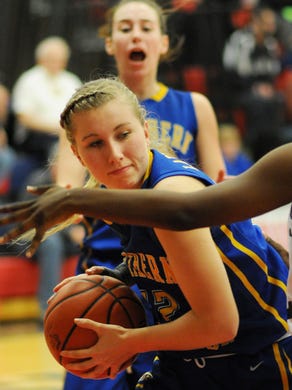 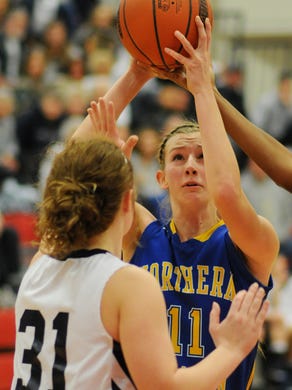 The Vikings routed Lebanon Catholic 40-21 on Wednesday night in an L-L semifinal at Lebanon High.

You can't have a Lancaster-Lebanon League championship game without the Northern Lebanon girls basketball team.

At least not this year, when the best Viking team in 30 years - or maybe ever - simply refuses to be denied anything it sets its mind to.

The Vikings added another memorable accomplishment to a season already filled with them on Wednesday night, overwhelming Lebanon Catholic 40-21 in a lopsided L-L semifinal at Lebanon High.

On paper, the contest figured to be lots more competitive. But with the Beavers (17-6) minus starting point guard Mariah Sholly due to a team rules violation, Northern Lebanon was simply too much for its county rival.

After some early success with a packed-in zone defense, the game got away from the Beavers in the second quarter when the Vikings put together a 16-2 spurt highlighted by seven of sophomore guard Liz Voight's game-high 13 points.

That turned a tight 10-7 game after the first into an it's-all-over 26-9 game at the half, and sent the long-suffering NL program on its way to a once unthinkable title-game berth against perennial power Lancaster Catholic. The 23-1 Vikings suffered their only defeat to the Crusaders last month, and will get the chance to avenge it on Friday - and shoot for its first-ever L-L title - at 7 p.m. at Warwick High School.

"This is great," said a grinning NL coach Ken Battistelli. "If you could see the eyes of those kids (in the locker room) when we said we're playing for a championship ... they're excited, they're having a ball. It's an incredible opportunity, and it's also awesome to know that I have a team that will fight to the death for it."

The Vikings have an opportunity that Lebanon Catholic would have cherished as well, but it would have been difficult to achieve even with Sholly in the lineup, given the Vikings' typically ferocious man-to-man defense and balanced scoring led by Voight, Zoe Zerman (12 points) and Megan Brandt (11).

"We don't match up with them," said Lebanon Catholic coach Patti Hower. "We were definitely out of sync (without Sholly), but more credit goes to Northern Lebanon for the defense they play. They always play defense, and that's what's gonna carry them."

Catholic played commendable defense of its own via the zone in the first quarter. And after Neesha Pierre (team-high 9 points) slashed to the bucket for two points in the waning seconds of the opening period to make it a 10-7 game, it appeared the Beavers might make a game of it.

But NL opened the second quarter with a Brandt putback followed by a pair of Voight buckets that sandwiched a Cassiah Ray corner jumper and bolted to an 18-7 lead with 5:16 still left to play in the half. 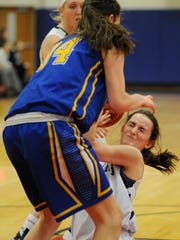 "The last five or six games, we didn't play against very much zone," Battistelli said. "In the beginning we were having trouble hitting our gaps, but as the game went on we settled in."

Voight was a big reason for that, playing with the perfect mix of poise and aggressiveness. The Vikings are a handful when Voight isn't at the top of her game; when she is they're positively lethal.

"She adds another dangerous, dangerous player," said Battistelli. "I thought she shot the ball well the whole game, but I loved the end of the game, when she looked like she was controlling the offense a little bit. It looks like she's maturing, and a mature Liz is going to be so huge for us."

"She came to my (summer) camp since she was in like third grade," Hower said with a chuckle, about Voight. "She's a really good shooter, and she has that passion for the game, where she's gonna work and make herself a better player."

It's a passion she shares with her teammates, which is why Northern Lebanon will be chasing history Friday night.

"I don't know what this means for the program," Battistelli said. "I don't know anything other than we get to play for a league championship. I know we're not intimidated. What the heck, let's go." 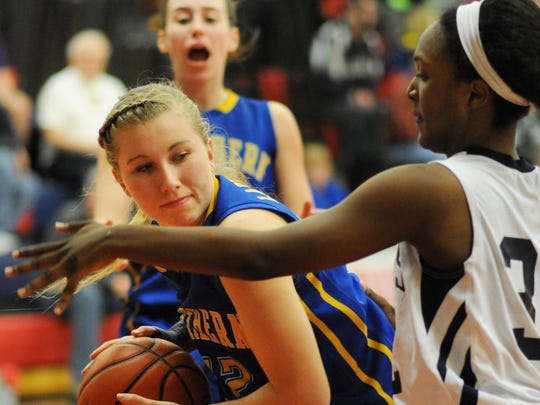