Most of the time, as evidenced by its 17 District Three Class A titles, the Lebanon Catholic girls are a top-notch small-school program that can occasionally throw a scare into a bigger foe if everything goes right on a given night.

The Beavers upset Section One co-leader Manheim Township 58-52 in overtime to win the Lebanon holiday tournament on Tuesday night. 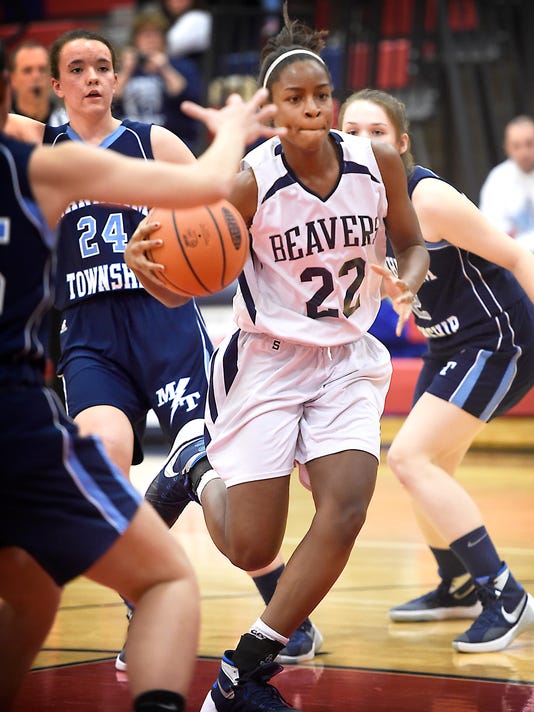 Lebanon Catholic's Neesha Pierre heads to the basket for two of her game-high 20 points in the Beavers' 58-52 overtime win over Manheim Township in the finals of the Lebanon Booster Club Holiday Tournament on Tuesday night. Pierre was also named the tournament's MVP.(Photo: Michael K. Dakota, Lebanon Daily)Buy Photo

Most of the time, as evidenced by its 17 District Three Class A titles, the Lebanon Catholic girls are a top-notch small-school program that can occasionally throw a scare into a bigger foe if everything goes right on a given night.

And then there are years when the Beavers are capable of going toe-to-toe with - and beating - just about any program they face, big or small.

Guess which type of season this is shaping up to be?

Here is a clue: Lebanon Catholic 58, Manheim Township 52 in overtime.

Behind a game-high 20 points from tournament MVP Neesha Pierre and a collective competitive fire that simply couldn't be put out, Catholic gave itself a late Christmas gift and assured one and all in Beaver Nation of a Happy New Year with a thrilling OT triumph over Section One co-leader Township in the title game of the Lebanon Booster Club Holiday Tournament on Tuesday night.

Now 7-3 and looking better all the time, the Beavers overcame a seven-point deficit midway through the third quarter and a tough, physical Township team for a lot of reasons. Not the least of which was Jayden Shellehamer's game-tying 3-pointer with five seconds left in regulation that forced OT and Pierre's driving layup off the opening tip in the extra session that put them ahead to stay.

But most of all, Catholic just kept swinging against an opponent more than capable of swinging back.

"You always want to win a game, but we just wanted to win this one really bad," said Pierre, who was sensational in attacking Township's defense all night. "It's important to us, because when we play bigger schools they expect to win because we're such a small school. We're always the underdog when it comes to tournaments like this."

Catholic did not look much like an underdog while ending Township's six-game win streak. It had its hands full with, among others, Blue Streaks guard Olivia Matto, who dropped in 19 points. But it never trailed by more than seven and was engaged in the fight throughout, getting 14 points from Allie Warren and 12 more from all-tourney pick Mariah Sholly to match Township shot-for-shot and play-for-play.

"For us, it was huge," Lebanon Catholic coach Patti Hower said. "It's a tournament championship, and we beat a quad-A school, who's in first place in Section One. It's gotta give us some confidence."

As noted, Township (6-5) opened up some space midway through the third, going up 31-24 on a Caitlyn Newcomer jumper only to see Catholic score the last six points of the period capped by Warren's 3-pointer with a minute left in the frame. 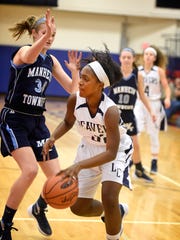 But the Blue Streaks stood strong and appeared ready to escape after Matto made it a 44-38 game with 1:45 to go in regulation.

Catholic would not be deterred, though, scoring eight of the next 10 points, none bigger than Shellehamer's straight-on '3' off an offensive rebound of a Warren miss that forced OT.

"The shot wasn't even meant for Jayden," Pierre said, smiling. "It was meant for Allie, but she took it and she made it and we were all ecstatic."

The Beavers then owned the OT to the tune of a 12-6 run through he four-minute period, and all but sewed things up with two Pierre free throws with 36 ticks left.

"We know we can compete," Hower said of the importance of the win. "I think that'll definitely help our confidence level. The fact that we were losing and came back will help us, too. And when we get into (districts) it's definitely gonna show, because there's no teams like (Township) in single-A."