Northern Lebanon girls basketball coach Ken Battistelli knows that something special might be cooking this winter. 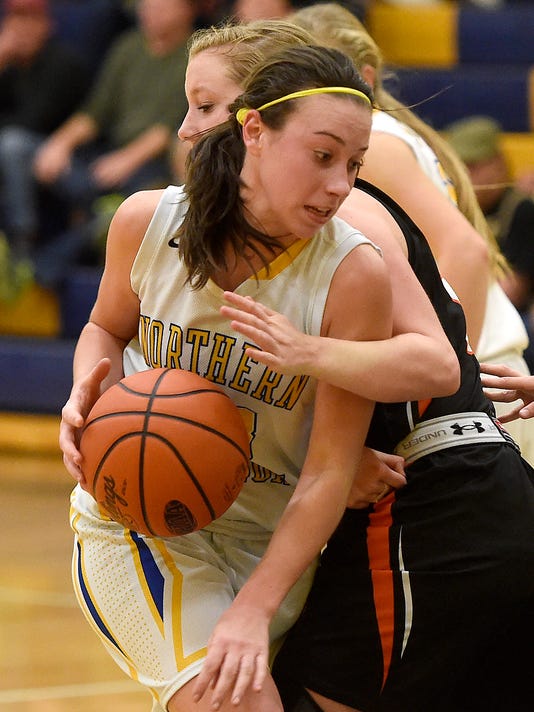 Northern Lebanon's Zoe Zerman and her teammates put their unbeaten record on the line against Lampeter-Strasburg on Wednesday night.(Photo: File Photo)

Northern Lebanon girls basketball coach Ken Battistelli knows that something special might be cooking in Fredericksburg this winter.

Coming off a 31-point performance by Zoe Zerman in a big win over Cocalico in Denver on Monday, Battistelli’s unbeaten crew came home for another Lancaster-Lebanon Section 3 encounter, this one against L-S. It wasn’t anything near what the Vikings had done two nights before; and the argument could be made they were ripe for getting picked off.

Perimeter shots weren’t dropping for Vikes on Wednesday night, Zerman was not dropping buckets the way she had and the pace, execution and general performance was not what Battistelli would have wanted to see.

But the Vikes managed to pull away after the halftime break, after being tied at 22.

“What surprised me is the mental toughness. We were not right tonight, but we battled,” Battistelli said. “They battled themselves. L-S was very tough - they were physical, they were good, they were aggressive and we had to manufacture that toughness.

“They (his Vikings) have not bailed in a game this year. We were not good tonight, but we didn’t surrender and we still won by nine against a team that knows us well. I told them I wasn’t happy how they played, but I’m delighted and I’m proud that they won’t surrender and they found a way, because that’s what tonight was.”

Zerman’s personal 5-0 run to open the second half gave Northern Lebanon a 27-22 lead and created just enough separation to see the job through. After scoring just two points in the first quarter, at the buzzer, Zerman finished with 12 points, tying Megan Brandt for team-high honors.

It was not game of runs. The longest run put together was six, done twice by the Vikes - once during the final 1:42 of the contest, cobbled together at the free throw line for a wider margin than play would suggest; the other early in the second quarter on two baskets by Cassiah Ray and one by Brandt that turned a 16-13 deficit into a 19-13 lead.

It was a key sequence in retrospect; the Vikes were tied twice before the break but were never headed.

“We made almost no adjustments in X’s and O’s,” Battistelli said. “We didn’t seem like ourselves in the first half and I didn’t see it coming. We had a good day of prep (Tuesday)."

Battistelli credited Amber Kintzer for keeping the Vikes close while they scrapped through the opening 16.

“Amber really stepped up for us when we were struggling,” the coach said. “She came up with big rebounds and hit some shots for us.”

Kintzer scored six points, all seemingly coming at big junctures during the first half.

L-S was led by Laura Horner’s 14 points and Nevin Hoenninger’s 11, but got precious little else from the rest of the squad.

The Vikes hit Christmas at a perfect 9-0. It’s a long season, but Battistelli is seeing an intangible he can hang his hat on moving forward.

“I’ve had teams before that when there’s no spark, you can’t generate it,” he said. “But Megan made some plays of sheer will, Zoe made some plays. Kintzer was steady the whole game. They willed their way.”