The bar had been set low; the odds facing them stood tall. Working under the the tag of a rebuilding year tends to have that effect.

Yet time and again last season, the Elco girls basketball team proved it didn't care about tags or odds. Symbolized by their often superior rebounding efforts against larger teams, the Raiders leapt up and over the rebuilding bar to a respectable 9-13 finish that came one win away from a .500 mark in league play. Having graduated only two seniors, much of the blue and gold looks the same this year, but the question is now different.

How high should the new bar be?

On the surface, not much is expected from a still young Elco group. Deploying only one senior inside a competitive section tend to have that effect.

But looking closer, you'll find one of the more intriguing teams in Lebanon County this winter. And perhaps one of the county's most pleasant surprises.

Led by senior Chandelle Keller, the Raiders are set to return three starters and introduce a dearth of talented youngsters for their 2015-16 campaign. Keller, the do-it-all forward, should again fill up the stat sheet in her send-off season, complemented by junior Alexis Thomas and Taylor Bossert. While the trio will be counted on collectively for their experience, one is expected to shoulder most of the load. 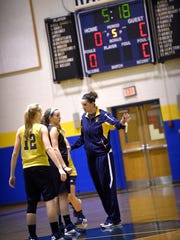 "Chandelle just gets it," Elco coach Ashli Shay said. "She's a very good athlete. She does a lot of great things for us, and she's a good kid to have out there for everyone to rely on."

Despite being tasked nightly with handling opponents' top interior threats, the 5-foot-8 Thomas held her own before and after an mid-season injury last year. The junior forward had been averaging 11 points per game prior to getting sidelined, good for second on the squad and one basket behind Keller. Her efforts will again be central to the Raiders' play in the paint, where opponents are likely to again attack this undersized group.

Out on the perimeter, Bossert will again be firing away from three-point range, akin to her junior brother, Mason, who starts for Elco's boys team. The younger Bossert poured in a season-best 23 points in the Raiders' penultimate game a year ago at Hamburg, perhaps offering a glimpse of things to come.

"I think you'll see more out of her because she'll be comfortable, and we'll have others that will bring some offense to the table" Shay said. "I think we'll have more versatility and more options on offense."

Among those options include returner junior guard Adrianna Sonnen and newcomers Ryelle Shuey and Julia Nelson. The latter two most recently wrapped up terrific seasons for Elco's girls soccer team, which fell one win shy of qualifying for the state tournament. Early signs are that the pair should be able to seriously contribute on the hardwood, too, though exactly how much is yet to be determined.

However, offense is not the primary concern for Shay, who enters her sixth season pacing the sidelines in Myerstown. For the difference between a good and great season will be found on the opposite end of the court, where the team's new mantra of pride will truly come to life.

"The offense will hopefully take care of itself. Our push every day is going to be play defense and hopefully score layups. And I think now you're going to see the athletes that are capable of doing that. I hope we can push the ball, push the tempo."

ELCO GIRLS AT A GLANCE