A-C set to shine under the bright lights

The Friday night lights will go on for the first time this season on, well, Friday night and when they do the Annville-Cleona football team will be hosting the only game in town. Or at least the only one being played on Lebanon County soil.

A-C set to shine under the bright lights

Annville-Cleona is one of just a handful of teams set to open the 2016 season on Friday night, and it will get to do so in front of its home crowd.

The Friday night lights will go on for the first time this season on, well, Friday night and when they do the Annville-Cleona football team will be hosting the only game in town. Or at least the only one being played on Lebanon County soil.

One of only a handful of Central Pennsylvania teams - three of which are from Lebanon County - playing for keeps this week on the first available date to start the 2016 campaign, the Little Dutchmen host Trinity in a non-league opener Friday at 7 p.m.

It's an early start that has second-year A-C head coach Matt Gingrich both excited to to play in front of what should be an enthusiastic home crowd and apprehensive in an 'Oh my God, are we ready?' kind of way.

Either way, it's almost go time.

"I tell you what, it really didn't hit until about last Thursday, when I said, 'We've got eight days until a game,'" Gingrich said on Wednesday during a break from overseeing practice. "On the one hand it's neat it's to get started, on the other hand we have a lot of things we haven't been able to do that we've done in the past because we just haven't had the time.

"It is interesting, boy oh boy. It's kind of like the Wild, Wild West. But it's neat to be playing in two days, and we'll be the only team in town so I'm sure we'll have a huge crowd here."

A little practice work on the passing game for A-C ends with a diving catch. pic.twitter.com/KdldVYRIhg

A-C will be facing a Trinity squad coming off a 3-7 2015 season, while for its part it will have a mostly new look after heavy graduation losses from a squad that qualified for districts last season.

With that in mind, the Little Dutchmen will lean heavily on their most experienced players - junior quarterback Noah Myers, senior running back Cameron Hoch and senior lineman Isaac Burris - to get the season off to a good start.

"Last Saturday morning we were standing in our gym and I looked at everyone and I could see the fear in their eyes," Gingrich said of his troops' look prior to last week's scrimmage vs. Lebanon, which it ended up winning. "Very few of these kids have played varsity football. But after the first 20 plays, we were very proud and excited with what they did. That was neat to see. We're pretty excited."

To remain that way after Friday night, A-C will have to slow down a three, four or even five wide receiver offense the Shamrocks will employ and find ways for Hoch, Myers and company to make some big plays against Trinity's 4-4 defensive alignment.

"It'll be an open, no-huddle offense and a traditional defense," Gingrich said of what the Shamrocks will be showing. "It'll be interesting."

Of course it will be. It's opening night, when the lights shine the brightest.

Also in action on Friday night from Lebanon County: 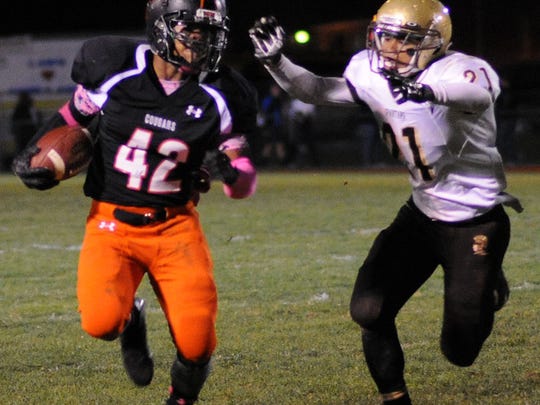 Here's a doozy of a season opener for you, courtesy of this Mid-Penn Capital Division clash between would-be title contenders.

The two produced an instant classic in last season's matchup, with Camp Hill rallying past then 6-0 Palmyra by a 28-24 score en route to posting an 11-2 record and ultimately claiming the District 3 Class A title.

Palmyra, which was 7-4 and also went to districts in AAA last season, is led by a talented returning core group that includes backs Alon Rhette and Carl Reigle, tight end/defensive end Mason Cooper and new quarterback Peter Robertson. Camp Hill counters with,among others, tight end phenom Zack Kuntz and big-play back Bill "Boo" Williams, both of whom figure to provide a mighty test for the Palmyra defense.

Expect a good one if you're making the trek to Camp Hill on Friday night.

The Vikings make the short trip north to Schuylkill County for their traditional season opener with the Cardinals.

It's an opener that should answer some questions for Northern Lebanon, which is relying on some new faces this time around after being hit hard by graduation.

One face that isn't new, though, is senior running back Luke Funck, who eclipsed the 1,000-yard mark last season and will be a key to NL getting off on the right foot on Friday night.

Pine Grove, meanwhile, is coming off a 1-9 2015 campaign and looking for any positives it can find while starting the new season. Safe to say, the Cardinals have more questions to answer than their guests do. Looks good for Northern Lebanon to open its quest for a third straight postseason berth in a positive manner.