WILKES-BARRE — Whether leaning toward the right or the left, Lake Lehman remained even-keel on the way to a 4-1 victory over Annville-Cleona in the PIAA 1A field hockey opener Tuesday night at Wyoming Seminary’s Nesbitt Field.

A-C ended its most successful season in decades at 19-5 after a 4-1 loss to Lake Lehman on Tuesday night. 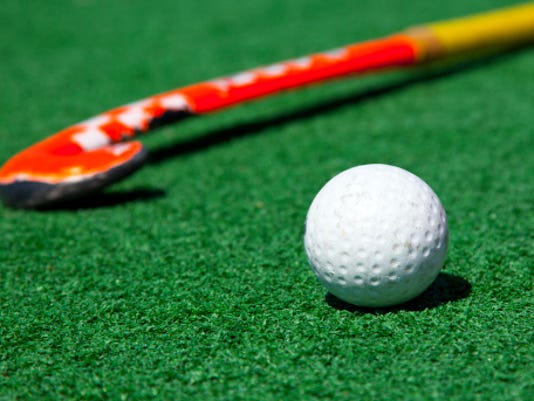 WILKES-BARRE — Whether leaning toward the right or the left, Lake Lehman remained even-keel on the way to a 4-1 victory over Annville-Cleona in the PIAA 1A field hockey opener Tuesday night at Wyoming Seminary’s Nesbitt Field.

The loss ends Annville’s notable season with a 19-5 record that included its first Section Three title in 44 years and first appearance in the State playoffs since 1985.

Perhaps even more impressive was how the Little Dutchmen took an early lead Tuesday, fell behind, and then refused to concede defeat to the Black Knights (17-0-1) despite facing long odds on the road.

“They’ll be disappointed,” said A-C coach Sue Felty on her players’ emotions on the long bus ride home. “They’ve been together so much; we’ve done a lot of things like team meals and stuff. I think they’ll miss that; I know I do. I have a bit of a letdown when the season ends. I think they’ll feel that same way.”

What Felty and her players won’t be feeling is disappointment on the team’s performance on Tuesday.

The Black Knights slowly took over the pace of play over the first ten minutes. But Annville countered when it got the chance.

A nifty aerial pass from Harper Sellers to Katelyn Brightbill began a Dutchmen attack into the Knights’ circle. Brightbill’s shot was saved by Lehman goalkeeper Alicia Galasso, but the junior forward would take advantage on the ensuing corner, finding Emily Fiebig coming from the right for a 1-0 lead at the 10:24 mark.

“When you’re in the bus for almost two hours you worry about how you’re going come out and play,” Felty said, “so yea, getting the first goal there felt real nice.”

“They scored the same way when I saw them on Saturday,” said Knights’ coach Jean Lipski. “It’s a great corner (play) and they have girls with great sticks. Corners are a place where you should score — it’s setup for the offense to have an advantage.”

True to Lipski's  point, Lehman rebounded by racking up 12 first half corners and scoring on two of them to take a 2-1 lead at the half.

With A-C keeper Haley Zimmerman (12 saves) dominating the right side of the cage and her defensive mates Addie Plummer (two defensive saves), Cass Connelly and Sellers working to clear the circle, Lake-Lehman should have gotten flustered.

But the Knights started attacking to Zimmerman’s left, getting the equalizer from Temple recruit Taylor Alba eleven minutes before the half.

“We’ve talked with the girls, a lot of them have played enough hockey to understand that if it’s not working one way you have to adjust when you’re out on the field,” Lipski said. “This team is so even. They just do their job and then they come off and then they get ready to do the next job.”

As such, Lake Lehman would put the game away with two goals from Makayla Adams in the first eight minutes of the second half.

But Annville didn’t quit, continuing to play hard on defense and nearly tallying another goal when Morgan Zimmerman passed across the circle to fellow senior Michaela Singer. Galasso (four saves) made a great diving stop, however, and the Lehman defense cleared the ensuing corner to hold on for the win.