Kiley Gallagher and Erin Huffman accomplished quite a bit during the fall while helping the Palmyra field hockey team to a District Three Class AAA championship and a berth in the AAA state finals.

Kiley Gallagher and Erin Huffman accomplished quite a bit during the fall while helping the Palmyra field hockey team to a District Three Class AAA championship and a berth in the AAA state finals.

On Wednesday, the two celebrated one last, crowning, achievement.

The two Cougar senior standouts will end their scholastic careers as All-Americans after being honored with that distinction by the National Field Hockey Coaches Association.

Gallagher, a versatile, playmaking midfielder, earned a first team selection to cap her distinguished tenure at Palmyra, while Huffman, a dynamic forward who tallied the game-winning goal in Palmyra's district championship triumph over Penn Manor, was picked to the All-America third team.

"The dynamic between the two of them - and the rest of the team is quite special," said Palmyra coach Kristi Costello. "To have two incredible scorers on the same team is a great feat.  Often times selfishness can come into play when you have talented players.  These two (and their teammates) loved Palmyra Field Hockey - they loved their teammates - and they loved to win. They did whatever the coaches asked of them -including playing many different positions) to help our team be successful."

The two will continue their field hockey careers at the collegiate level. Gallagher is headed to Boston University, while Huffman will play at Old Dominion. 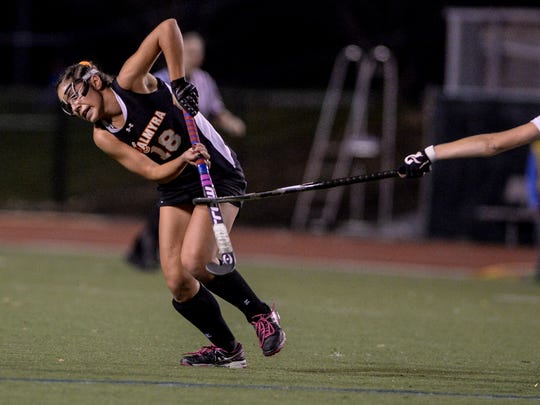