HARRISBURG - Palmyra Area High School freshman Ben Clary is blessed with poise and maturity beyond his years when he steps onto the tennis court. 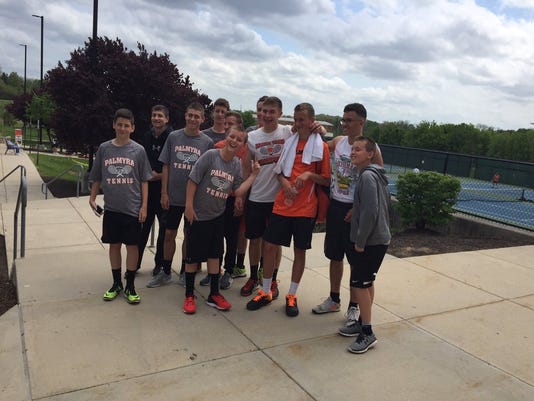 HARRISBURG - Palmyra Area High School freshman Ben Clary is blessed with poise and maturity beyond his years when he steps onto the tennis court.

He's got some game, too.

Clary continued a stellar rookie high school season filled with wins on Monday by grabbing his biggest victory to date, the Mid-Penn Conference 3A singles title with an impressive 6-3, 6-0 dismantling of Hershey's Dante Falcucci in the title match at breezy Central Dauphin East High School.

Defeated just once this season - by Cedar Crest standout Jack Muraika in the Lebanon County final - the top-seeded Clary used his steady, consistent baseline game to great effect, flustering the big-hitting, big-serving Falcucci throughout while jumping to a 4-1 first set lead, then later winning the last seven games of the match on the way to becoming Palmyra's first-ever Mid-Penn singles champ.

"Yeah, I did. I knew it would be hard, but I thought I could do it," Clary said, when asked if he believed a Mid-Penn title was in store for him when the season began. "It wasn't easy, but I got it done. It feels good to be the first one from Palmyra to do it.

"He's very composed for a freshman," Palmyra coach Abbie Mahaffey said of Clary, who did not drop a set in the tournament, "which I think is what has won him some matches. Certainly, he's a very good player, but he also can keep his emotions (in check) when he's playing. We knew he was capable of good things, but he's gotten better every day, too.

"It's a huge thing for the program. It's bringing attention, which is awesome."

Clary was plenty good enough on Monday against the second-seeded Falcucci, either outlasting Hershey's top guy in baseline rallies, or rifling passing shots by him when Falcucci ventured to the net to force the issue. Not even gusty winds at times, which can mess with a player's head, could rattle Clary or distract him from the task at hand.

Facing and beating Falcucci in a regular season encounter a few weeks back didn't hurt Clary's cause either, when it came time to battle for the championship.

"It definitely helped, because I knew how he hit," Clary said. "His serve is huge. I took that knowledge and used it to my advantage. I like being the consistent person, not making the mistakes. I like to make him make the mistakes. The wind bothered me a little bit, but it bothered him more."

"You could tell that they matched up well," Mahaffey. "And he knew that, because they played before."

Adding to Clary's advantages on Monday was the presence of a support system of teammates, friends and family who made the early afternoon trip to CD East for the match.

Next up for Clary is the District 3 3A Singles Championships, which get underway Friday at noon at Hershey Racquet Club. 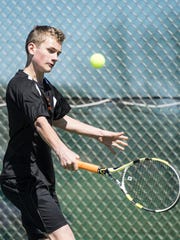