PALMYRA - Its schedule indicates that the Palmyra boys lacrosse team's toughest tests lay ahead, with four opponents, all currently ranked higher in the district power rankings, slotted over one six-day span.

Palmyra junior Ethan Gain gets by Bishop McDevitt's Nick Miletic during the Cougars' 15-2 win at In the Net on Thursday.(Photo: Vicki Vellios Briner, For GameTimePA)

PALMYRA - Its schedule indicates that the Palmyra boys lacrosse team's toughest tests lay ahead, with four opponents, all currently ranked higher in the district power rankings, slotted over one six-day span.

But as far as coach Dave Ondrusek is concerned, the Cougars' first gut-check arrived Thursday. And they passed with flying colors.

Reeling off a mid-game stretch of 10 straight goals, Palmyra cruised to a 15-2 home win over Bishop McDevitt in its first division showdown of the season. The Cougars (6-4, 1-0 Mid-Penn Keystone) netted at least three goals in every period, boosted early by Ethan Gain's trio of first-quarter assists. Gain finished with a team-high six points, one more than Kyle Nolen and two ahead of Jared Richard, both of whom tallied four goals.

"We're finally able to run our plays right. Just execute the plays," Gain said of Palmyra's offensive success. "I noticed they were playing a zone, so it was easier to dodge and then pass it off. I'd draw two men and I'd dump it off and get the assist every time."

The Crusaders (3-6, 1-4) received their only goals from leading midfielder Griffin Hanes, who commanded most of the Cougars' defensive attention. Ahead 6-1 and down a man late in the second quarter, Palmyra called timeout to reinforce the finer points of a half-man, half-zone defense designed to throw Hanes and Bishop McDevitt off-kilter.

"We threw it in yesterday," Cougars coach Dave Ondrusek said. "They started to get it, but there's work to be done. We're going to need it against Hershey. That's the big one."

After holding the Crusaders scoreless during their man-up chance, Nolen and Richard accounted for the next four Palmyra scores, yielding a nine-goal advantage early in the third. 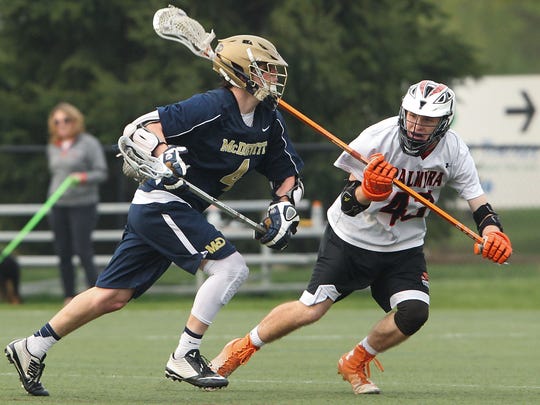 Palmyra senior Sean Taylor defends against Bishop McDevitt's Griffin Hanes during the Cougars' 15-2 win at In the Net on Thursday. (Photo: Vicki Vellios Briner, For GameTimePA)

A trip to Red Lion next awaits Palmyra on Monday, before an away game at Central Dauphin 24 hours later and then a critical matchup with first-place Hershey on Thursday. And once all that's in the books, Central York comes to town on Saturday, April 30.

"The one thing I wanted to avoid today was a letdown."

Consider the letdown averted. Now it's time for the Cougars to step up into the spotlight.