Palmyra had lost two games by one goal each, but they left no doubt in this game. 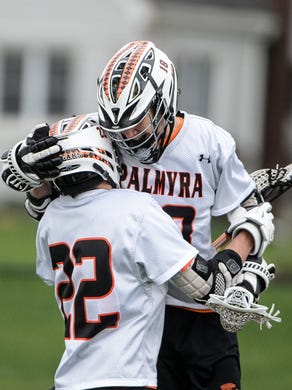 Palmyra's Pete Robertson (22) and Jared Richard have played key roles for the Cougars during their historic season. Richard, currently sidelined with a hamstring pull, is hoping to play Tuesday in the program's first-ever district playoff game. File
Fullscreen 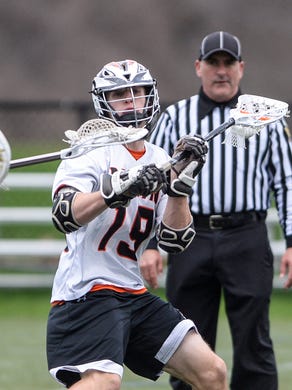 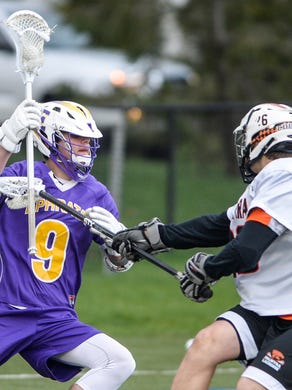 Palmyra's Pete Robertson (22) and Eric Thomas (10) celebrate a goal during the Cougars' 13-4 win over Ephrata on Monday, their first of the season.(Photo: Jeremy Long, GameTimePA.com)Buy Photo

But Monday, even as the wind whipped and temperature tumbled at In the Net sports complex, victory wasn't going anywhere fast. Through dominant first and third quarters, the Cougars made sure of that.

Palmyra handled Ephrata, 13-4, and never trailed en route to its first win of the season and under new head coach Dave Ondrusek. Cougars senior Jared Richard netted a game-high four goals, while teammate Pete Robertson and the Mounts' Ryan Holochuck each recorded hat tricks. The triumph sparked a busy four-game week for Palmyra (1-2), which is set to host Northern York on Tuesday.

For now, the Cougars are simply content with their promising start.

"It's definitely nice to get a win under our belts," Robertson said. "We wanted to focus on executing our offense and getting our new offense down, making sure we don't mess up."

Robertson was responsible for the night's first score and Palmyra's initial two, before he later handed the offensive baton to Kyle Nolen (two goals) and Richard, who scored three straight around intermission.

Another Richard, Alec, tallied two assists, the byproduct of fluid ball movement that sustained the Cougars' outbursts at the start of each half. Such selflessness also highlighted the continuing development of an attack that kept pace with perennial powers Carlisle and Cumberland Valley last week.

"These guys are learning the concepts that we were we're trying to implement," Ondrusek said. "And now they're understanding why they do the things they do, which is really nice to see when it all comes to fruition." 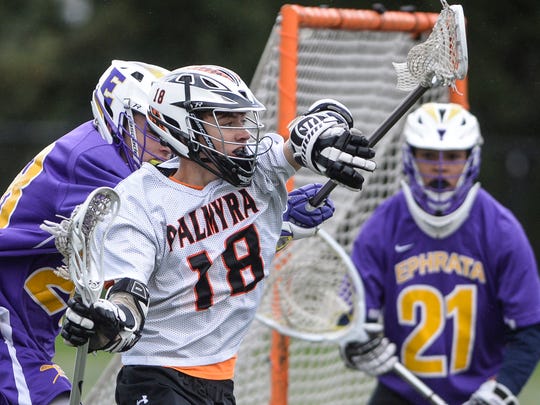 Palmyra's Alec Richard fights off Ephrata's Mason Klaus during the Cougars' 13-4 win over Ephrata on Monday, their first of the season. (Photo: Jeremy Long, GameTimePA.com)

Following a slow second quarter, Palmyra burst out from halftime with goals from Nolen, the Richards, Cam Ihli and Robertson. Ahead 12-3 entering the fourth, the Cougars executed their new, controlled style of play that yielded uninterrupted possession for the final minutes.