It's time for Act Three. Cedar Crest and McCaskey will meet for the L-L boys championship for the third time in 4 years. 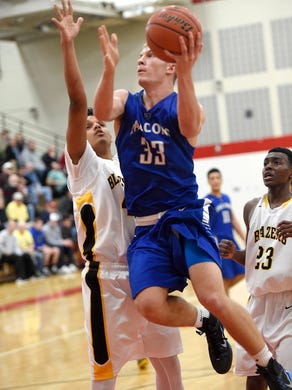 Falcon Ariel Jones makes an easy two point lay up by sneaking ahead of the Lancaster Catholic defense at the 3:17 mark in the first half of play at Warwick High School, Wednesday, Feb. 10. Michael K. Dakota, GametimePA
Fullscreen 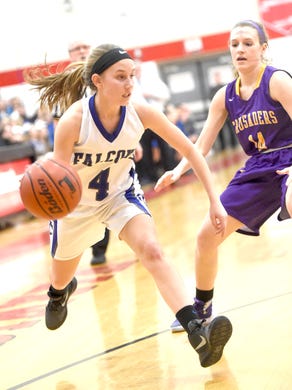 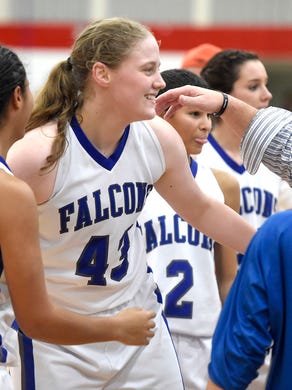 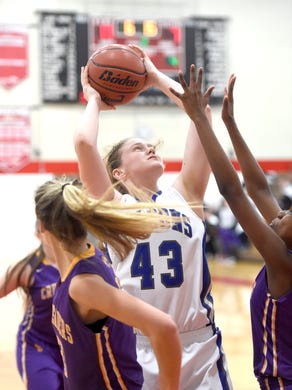 Cedar Crest Ariel Jones drives to the hoop for two late in the fourth quarter against Lancaster Catholic at Warwick High School, Wednesday, Feb. 10. The Falcons tried to come back from a deficit but fell to the Crusaders 43-40. Michael K. Dakota, GametimePA
Fullscreen

LITITZ - It's time for Act Three.

For the third time in the last four years, the Cedar Crest boys basketball team will meet McCaskey with a Lancaster-Lebanon League championship at stake, having survived a 58-56 scare from Lancaster Mennonite in an L-L tournament semifinal Wednesday.

The Falcons (19-5) watched a pair of potential game-winning Blazer 3-pointers miss over the final 10 seconds and held a near wire-to-wire lead. Evan Horn dropped a game-best 27 points, allowing Cedar Crest to makes its fourth straight appearance in the league title game, which will take place 7 p.m. Thursday at Manheim Twp.

Having losing twice to the Red Tornadoes during the regular season, another shot at their chief rivals is all the Falcons and their senior captain and have been waiting for.

“I wanted McCaskey for sure," Horn said of Thursday's championship. “We’ll be ready. We know what they do, they know what we do. We know how they’ve beat us, so we’ve got to come out with a different game plan and be ready to go from there.”

Through an individual 19-point effort in Wednesday's opening half, Horn had Cedar Crest ready from the start, though the Blazers kept pace despite intermittent double-digit deficits. The Falcons led by 13 midway through the second quarter, when a 10-2 Lancaster Mennonite run would've closed the half, had it not been for an acrobatic Horn layup that beat the buzzer.

Down 36-29 at the break, the Blazers (12-12) outscored Cedar Crest in each remaining quarter, thanks to a balanced offensive effort spearheaded by Carter Hurst, Kyle Kerr and Cody Hurst. Each finished in double figures for Lancaster Mennonite, which entered the fourth quarter on an 11-2 spurt and found growing success in denying Horn the ball.

“We got a little complacent offensively and they did what they do well," Falcons coach Tom Smith said. "And that was get out and play in transition and find their shooters.”

While Cedar Crest guards Dylan Miller and Blake Thomson then provided their squad short-lived breathing room via layups, the Hursts continued assaulting the basket and kept the Blazers within striking distance. Next, following a pair of Carter Hurst free throws, two of his five in the quarter, Kerr nailed a trey that supplied a 56-54 margin at 2:04 remaining. 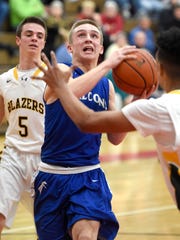 Horn soon managed to loop in an answering left-handed layup, but when Cody Hurst scored on the ensuing possession, the Falcons senior couldn't throw in another bucket and left fate in the hands of Lancaster Mennonite. The Blazers chose specifically to place it in Carter Hurst's possession and upon driving to the hoop, he kicked to an open Jon Gillespie in the right corner, where Gillespie fired off-target and saw his resulting rebound get thrown to Kerr atop the key.

Only Kerr missed, too, and this year's Section Four runner-up failed to complete a monumental upset that would have denied an even greater rematch.

"I don't know that I could have diagrammed that any better," Blazers coach Geoff Groff said. "Carter, he's driving and going to make a read; they collapsed on him. Jon (Gillespie) can knock that shot down, and Kyle (Kerr), we know, can knock his shot down."

Given where his Falcons stood last month, clearly outside of the L-L playoff picture, Smith isn't quite sure he could've drawn up Wednesday's result much better, either.

“Things looked not so good a few weeks ago," Smith said, "and they got to work, and here we are.”