In the thick coaching manual Danny Walck probably has tucked away on a nightstand somewhere, it says that any win is a good win. 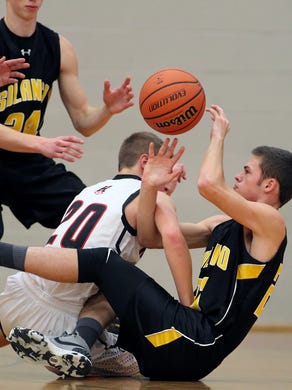 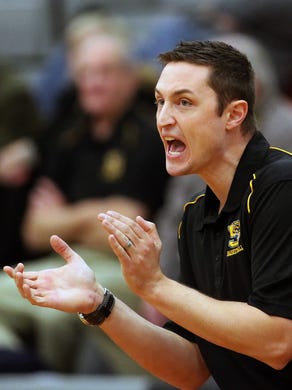 Hempfield's Andrew Green (3) is fouled on the way to the hoop by Solanco's Taylor Dombach (12), and Dylan Hastings (44) during first half action of a boys basketball game at Hempfield High School Wednesday December 16, 2015. Chris Knight, For GameTimePA.com
Fullscreen

Solanco's Dylan Hastings (44) tries to save the ball from going out of bounds against Hempfield during first half action of a boys basketball game at Hempfield High School Wednesday December 16, 2015. CHRIS KNIGHT, GAMETIME PA
Fullscreen

Hempfield's Andrew Green (3) is fouled on the way to the hoop by Solanco's Taylor Dombach (12), and Dylan Hastings (44) during first half action of a boys basketball game at Hempfield High School Wednesday December 16, 2015.(Photo: Chris Knight, For GameTimePA.com)Buy Photo

LANDISVILLE — In the thick coaching manual Danny Walck probably has tucked away on a nightstand somewhere — if the sage Hempfield boys’ basketball skipper even uses one any longer — undoubtedly it says that any win is a good win.

And that statement holds true whether you’re up by 20 with five minutes to go or even if you’ve got to work a few extra minutes to get that W.

Needing three overtimes to finally subdue a gallant Solanco side that kept coming back and coming back, Walck’s unbeaten Black Knights eventually emerged 80-71 after knocking down a bundle of free throws to close out the Lancaster-Lebanon League Section 1-2 crossover Wednesday night at home.

Bryan Karl pocketed 26 points, Ryan Moffatt chimed in with 22 and David Martin collected 10 of his 12 in the third quarter for Hempfield, which will try to pin down its sixth straight win Friday night at home against Manheim Twp.

Desmond Kreider chipped in 16 for Scott Long’s club, including a pair of treys in the final 26 seconds that enabled the Golden Mules to extend the game into OT.

Kreider’s second trey, a deep rip from the right wing that was set up by Michael Figueroa, came with 8.7 seconds to go and tied the game at 53-all. 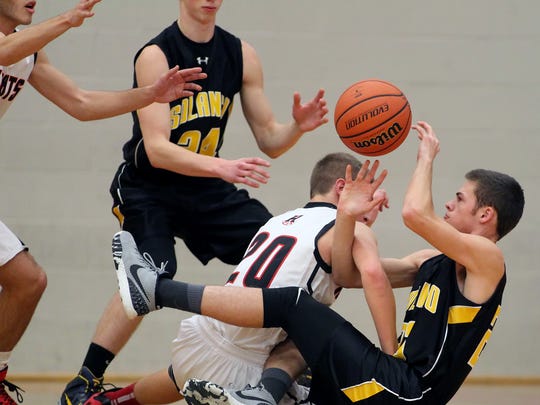 Karl’s last-ditch trey glanced off the backboard and rim, pushing the game into OT.

Little did they know that one extra stanza wouldn’t settle things.

“I thought Solanco was outstanding,” complimented Walck, whose Knights sported a 43-29 lead with 7:17 to play. “I thought they played with a lot of confidence and they made some big, big shots. That happens.

“The other side of it, I’m really proud of our kids for the heart they showed because we were not having a very good night,” Walck admitted. “But they showed the resilience. We had chances to fold and we refused to do that. I think we can grow with that, because there were a number of young players out there that’s never been in a situation like that … in a varsity game.”

“It was probably a fun game to watch — but it was nerve-wracking to coach.”

And while Hempfield owned a 59-55 advantage with 29.7 seconds showing and appeared to have things sewed up — four straight free throws from Moffatt had the Knights in favorable position — the 6-9 Hastings canned the last of his four treys with some 18 ticks to go. Plus, Hastings was fouled on the play.

One freebie later, the game was knotted up yet again.

We didn’t get the win and that was our ultimate goal, but I think we were down nine with like 1:10 to go,” first-year Solanco coach Scott Long said. “I’m very pleased to see us fight back — and that was great.

“I think that was an experience that’s hard to simulate in practice, so for us to get that type of experience and to fight back three different times [was huge],” Long continued. “We were down in both overtimes three or four points and hit big shots. I think that says a lot about our heart and our resiliency.”

Down four (65-61) with 26.7 seconds left in the second OT after Moffatt drained the front end of his two-shot look — Hastings had fouled out a minute or so earlier — a drive to the tin led to a conventional three-point play from Taylor Dombach with 17.9 to go. Karl sank two freebies moments later to bump the Knights’ lead to three, but Figueroa’s calmly stroked trey from the right wing pulled the Mules even.

Able to run off six consecutive points — two freebies from Karl and two more from Javon Mitchell sandwiched Martin’s 15-footer from the right wing — Hempfield led 75-69 with less than a minute to play. Figueroa swished two free throws to pull the Mules within four, but an intentional foul had Karl back at the line.

Karl converted the back end of his two-fer and Tyler Hilton popped four straight from the line as the Knights finally were able to fight off the Mules.

“We had to overcome a lot of ‘dumb’ plays that we shouldn’t have caused, or it could have ended much earlier,” said Karl, who paced Hempfield with five rebounds. “So the momentum they gained throughout overtime after overtime meant we just had to stay strong and stay together and get it done.”

And, the Knights were able to get it done at the line.

“They had a lot of good shooters and at the very end they got in foul trouble and came out of the game,” added Karl, referring to Solanco’s sound tactics late during which the Mules were gallantly trying to extend the game. “And we just knocked down free throws to win the game.”

Burying 29 of 38 freebies, including 9 of 10 in the third OT, genuinely pleased Walck.

“Very much so, because they’re pressure free throws and they gave us the cushion we needed to get this thing complete,” said Walck, whose club was outrebounded 37-19 by the visiting Mules. “And you’re talking about two juniors and a sophomore that I thought down the stretch were rock solid.”

Long, aside from the result, found plenty to like about Wednesday’s scrap.

Including a few things the Mules — Solanco was wobbled somewhat by Hempfield’s 3-2 half-court trap, yet recovered in time to mount the first of its thrilling rallies — hope to take into Friday’s Section 2 date at Elizabethtown.

“We’re optimistic and confident, but at the same time we had a game against Warwick Monday night where we looked like a different team,” Long admitted. “So I think the important thing with our kids is to understand what made us competitive tonight. We took care of the ball. We played our style. We defended.

“If we can carry that into Section play, we’ll be competitive. If we don’t, we’re gonna get the same result we’ve always gotten.”

Added Walck: “These are good experiences and there’s a lot to be learned from it.”

Especially when your side walks out with the win.