Dimeo's game-winner gets it done for Township

Matt Johns’ team may have led just once, but the Blue Streaks certainly picked the right time to jump in front.

Dimeo's game-winner gets it done for Township 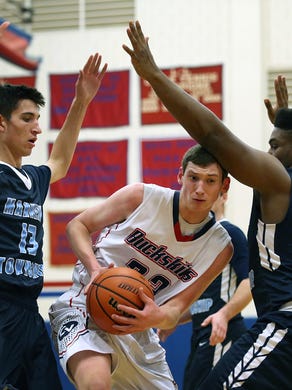 Conestoga Valley's Jovan Marrero (23) dishes the ball to a teammate as he flls to the floor against Manheim Twp. during first half action of a boys basketball game at Rill Gymnasium at Conestoga Valley High School Monday December 14, 2015. Chris Knight - GametimePa.com
Fullscreen

Conestoga Valley's Connor Whitacre (10) looks to pass the ball off to a teammate against Manheim Twp. during first half action of a boys basketball game at Rill Gymnasium at Conestoga Valley High School Monday December 14, 2015. Chris Knight - GametimePa.com
Fullscreen

LANCASTER — Matt Johns’ Manheim Twp. basketball team may have led just once, but the Blue Streaks certainly picked the right time to jump in front.

How about the very, very end?

Burly senior A.J. McCloud came off the bench to drop in 18 points for Township (2-3, 1-1), which evened its early-season league mark with a rousing triumph that could pay plenty of dividends as the 2015-16 campaign plays out.

David Dimeo hit a three-point with 1.2 seconds left to give Manheim Township a 61-59 victory over Conestoga Valley.

“At halftime, [Johns] was just talking about how we have to keep grinding,” DiMeo recalled. “We played a good first half, they just couldn’t miss any of their shots. They were shooting very well. We knew we were gonna come back.

“We just needed to fight harder and not give up.”

“It was just settling down and getting good shots,” McCloud added. “Playing defense, just like Coach Johns said. He said, ‘Just settle down and play D.’

Although still down six (59-53) with 1:32 to play after CV’s Connor Whitacre wheeled to the tin for a finish, the Streaks weren’t done.

DiMeo buried the second of his three treys — the sixth of Stutz’s seven assists preceded that hoop — with 1:18 showing to slice Township’s single-digit deficit in half. And when Theo Blantz missed the front end of a one-and-one, Johns’ bunch had the ball back with a chance to draw closer or even tie. 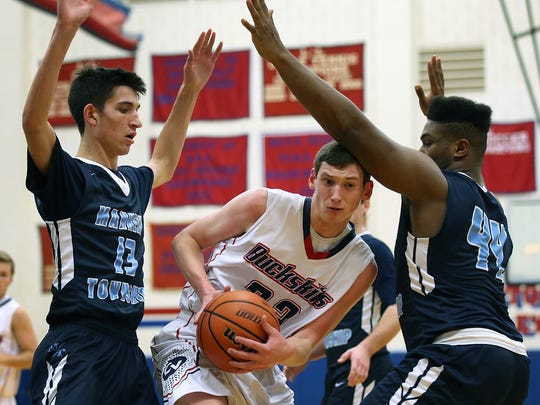 But they turned the ball back to the Buckskins, who promptly returned the favor.

Moments later, Michael Sharpe scored at the hoop with 22.9 seconds remaining, pulling Manheim Twp. within a single point. Whitacre had a chance to extend CV’s lead, but he, too, failed to convert the front end of a one-and-one.

Which brings us to Dimeo, who had to sit down briefly in the second half in order to reinsert a bothersome contact lens. Didn’t seem to trouble him late.

Running a play called during a timeout that had Stutz handling out front, Dimeo made a cut from the left wing, rubbed off a brief Phillips screen and found space on the right wing. When Stutz delivered the ball, Dimeo squared up and settled his feet.

An instant later, the ball was in the air.

“It was crazy. I can’t believe I made it,” said Dimeo, who pocketed all 11 of his points after the break. “I was shaking. My vision went blurry when I was shooting.”

Yet the ball fell.

“We just go over that play in practice and I practice that shot all the time,” Dimeo said. “Just felt right.”

“He’s been our most consistent shooter,” Johns admitted.. “Obviously, they knew to go 2-3 [in the fourth quarter] because we’re not a great shooting team. We might not be a good shooting team right now. But he’s our best shooter and we wanted to draw something up that we’ve been working on a lot that gets him a shot.

“Usually, when we do run that, he’s running the other way. But the first shot isn’t open as much as the second shot. I wanted to make sure he had the better look,” added Johns, a long-time Streaks assistant who returned to Neffsville this season after piloting Columbia to a pair of state playoff appearances.

“He squared, he sat in the chair and he got lift on it.”

And Dimeo buried it, capping a determined rally that delivered a needed W.

CV also started quickly, knocking down five of its first six looks from the floor.

Yet despite some daunting deficits, Johns’ Streaks didn’t cave. They may have wavered a bit, but they never stopped playing and playing hard.

“Four minutes, six minutes, eight minutes, that’s a long time in the game of basketball,” Johns said. “So we said at halftime, ‘It’s [12], we’re gonna get it down to six or seven going into the fourth quarter. And we said, ‘Hey, we’re gonna get this down to four or five in the first two minutes [of the fourth quarter] — and we were doing that, but they stretched it out to eight again.

“It allowed us to say, ‘Eight points, four minutes, we have plenty of time. Don’t panic. Possession by possession, we’re going to get good shots.’ And on the bench, we’re just constantly trying to build them up and build them up. The kids played so hard. They played so hard. We had two primary goals coming into this game.

“One of them was to play our tails off for 32 minutes.”

So, by playing hard throughout, that enabled the Streaks to climb back in. And eventually they bounced out with a satisfying victory.

“We said in the locker room afterwards, ‘That’s kind of a program-building win for us. That’s definitely a foundation stone,’” Johns added. “Because they showed that we can continue to fight, we can get good possessions, we can run when we want to run, we used the post — it wasn’t just a three-point game — and we just fought.

“We fought the whole game.”

And they’ll need that same type of fight Wednesday night at home, where the Blue Streaks will meet Garden Spot in another L-L 1-2 crossover.

“It was just great,” McCloud admitted. “I think it was a great win for Coach Johns and the team. We just played our hearts out.”

“That was a big game-winner,” Dimeo continued. “After our loss on Friday [at home against Lebanon], we really wanted to get a good win and I think this will change our momentum. We have some big games coming up.”