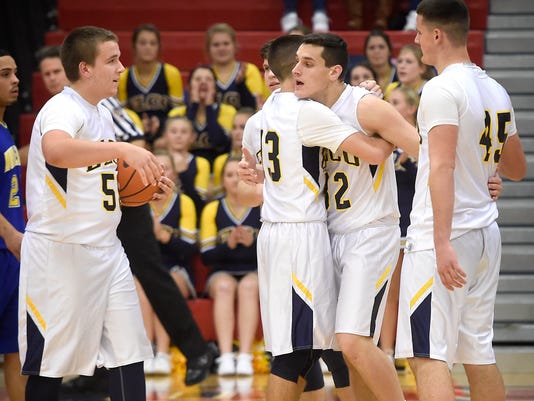 Welcome to the 4-point play.

Following every week of the high school boys basketball season, I'll provide four takeaways on the most recent developments in Lebanon County. This year's tip-off tournaments far from disappointed, and this is where we stand now.

How about that for making an entrance?

The Raiders rose to 2-0 Saturday night on Colton Lawrence's game-winning trey that capped a 61-60 victory in the Lebanon Tio-off Tournament championship. While the shot itself had some Elco faithful tweeting at Sportscenter, the game was truly highlighted by the Raiders' stupendous comeback. Down 10 points with one minute left and then nine at 0:39 to go, Elco overcame everything to make a statement surely everyone in the Lancaster-Lebanon League has now heard: these Raiders are ready to roll.

Folks who have followed the program know about Lawrence. Here's what they should soon learn:

Junior guard Nate Beamer has been a strong addition to Brad Conners' crew, particularly on defense. More importantly, the long, athletic Beamer affords the Raiders flexibility on both ends of the floor,  the ability to fly between them when he's at the No. 4 spot. Beamer won't always flash in the scorebook, but those keeping full stat sheets will have their eyes drawn to his line on a nightly basis.

Lastly, one issue, which lies in the weeds for every squad, could be foul trouble. It's true Elco boasts three starters who can flat fill up the hoop, but should Lawrence, Caleb Buchmoyer or Mason Bossert exit another tight game early, that's a heavy load for the remaining pair to carry. The referees at Saturday's instant classic were among the most lenient I've ever seen, and a stricter crew may have nixed the comeback effort before it began.

Thankfully, they didn't, and now everyone can be made aware that these Raiders are here to stay.

Lebanon's look is new, should be improved

Apologies to coach Tim Speraw and his staff for publicly raising the bar, but as he'll tell you, the Cedars (1-1) expect to win their section every year. And this season, they've got a real shot.

What immediately jumps about about the new version of last year's Section Two runner-up, which relied heavily on since graduated Jahlil Ortiz, are the team's quickness and depth. Rarely ever is Lebanon shortchanged in the athleticism department, and this winter will surely be no different. What will be rare, though, is seeing a Cedars guard blown by defensively. Guards Matty Lopez, Cam Shaak, Justin Baker and Danny Caricabeur lead a backcourt that should regularly manufacture steals with its pressure and generate a whirlwind of offensive movement on the perimeter, provided the ball is shared. Shaak is the sharpest shooter of the bunch, while Lopez carries the experience of a third-year starter.

Up front, sophomore Felix Kortright has not let his lack of career minutes get in the way of making an immediate impact, thus fulfilling preseason expectations held by a few opposing coaches who believed he would stand out. Kortright is joined on the block by senior Allan Escoto and, potentially, junior Shaq Ortiz, who has missed Lebanon's first two games and arguably could be its most talented player.

Understandably, the Cedars are down after a crushing, controversial loss to Elco. But don't expect them to stay there for long.

These Cougars can defend

En route to its Donegal Tip-off Tournament title, Palmyra (2-0) held Elizabethtown to a paltry 13 points in the first half. I repeat, 13.

Isaac Blatt, Austin Yetter and Eric Lynn are the returned Cougars starters in 2015-16. Seemingly, the orange and black have similarly brought back the tenacity that last year kept them in bouts against Mid-Penn heavyweights and earned a two-game stay in the District 3 tournament. If Palmyra can keep pairing this high-quality defense with its offensive weapons, we may be looking at a sleeper team this winter.

For during the Cougars' run to the postseason a season ago, the 6-foot-5 Blatt stepped up considerably down the stretch and figures to continue improving as an inside-out scoring threat. Meanwhile, Yetter (21.5 ppg) has provided no reason to doubt he won't further terror opponents with his long-range ability, a skill also boasted by junior Bryant Willis (15 ppg).

Northern Lebanon took down county rival Annville-Cleona in the third-place game of the Little Dutchmen's tip-off tournament, and they can largely thank Isaac Bicher for that. Bicher posted a game-high 18 points in the Vikings' first victory of the year, one day after dropping a team-best 14 against Middletown.

On the same afternoon, Cedar Crest senior Evan Horn poured in 25 to lead all Falcons, who clipped CD East, 74-68, in overtime. After making a concerted effort to improve his shooting over the off-season, Horn missed only one of his eight field goals in the opener.