The first day of the District Three Class AAAA baseball playoffs showed just how meaningless seeds can be. 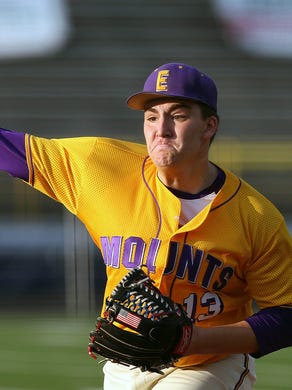 Ephrata’s Adam Schwartz (9) beats the throw and scores as Lower Dauphin catcher Tyler Freidrich (16) is lat with the tag during 5th inning action of a District 3 4A first round playoff game at War Memorial Field in Ephrata Monday May 23, 2016.(Chris Knight) CHRIS KNIGHT, GAMETIME PA
Fullscreen

Ephrata’s Nick Auker (12) gets an rbi for this sacrifice fly against Lower Dauphin during 5th inning action of a District 3 4A first round playoff game at War Memorial Field in Ephrata Monday May 23, 2016.(Chris Knight) CHRIS KNIGHT, GAMETIME PA
Fullscreen

Ephrata left fielder Andrew Thomas (21) makes a diving catch for the out against Lower Dauphin during 1st inning action of a District 3 4A first round playoff game at War Memorial Field in Ephrata Monday May 23, 2016.(Chris Knight) CHRIS KNIGHT, GAMETIME PA
Fullscreen 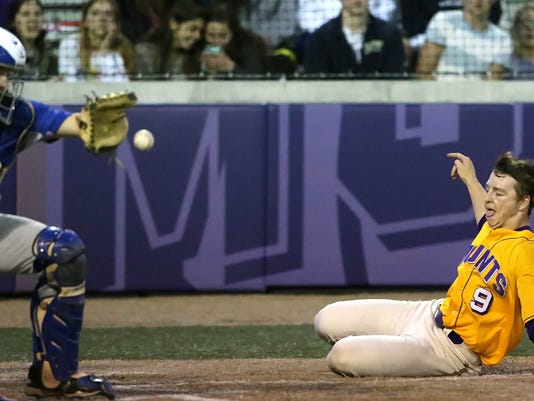 Ephrata’s Adam Schwartz (9) beats the throw and scores as Lower Dauphin catcher Tyler Freidrich (16) is lat with the tag during 5th inning action of a District 3 4A first round playoff game at War Memorial Field in Ephrata Monday May 23, 2016.(Chris Knight) (Photo: CHRIS KNIGHT, GAMETIME PA)

EPHRATA- The first day of the District Three Class AAAA baseball playoffs showed just how meaningless seeds can be.

The proceedings in Ephrata, meanwhile, displayed just how hollow some other numbers can be – i.e., the ones corresponding to slots in the host Mountaineers’ lineup.

While Hempfield and Penn Manor – the field’s Nos. 1 and 2 seeds, respectively – lost earlier in the day, the third-seeded Mounts beat Lower Dauphin 7-3 in a first-rounder Monday night at War Memorial Field, as the last four batters in their order combined for four hits, four runs and five RBIs.

“It means a lot,” second baseman Patrick Gallagher, the No. 6 hitter in the order, said after going 2-for-2, scoring three times and driving in a run. “It shows the whole lineup can produce runs, and it lifts the team’s spirits when everyone gets on base.”

Or as No. 7 hitter/right fielder Nick Auker said, “It just feels awesome, being able to produce and do well.”

Auker singled and scored, and drove in a pair of runs with sacrifice flies. No. 8 hitter Mitchell Storb also chased in a run, as did No. 9 hitter Evan Frees.

All of which enabled Ephrata (17-6) to advance to Thursday’s quarterfinals against Muhlenberg, a 4-1 winner over Elizabethtown. Site and time are yet to be determined.

“I told them before we opened the district playoffs, we will not be able to win with holes in our lineup,” Ephrata coach Adrian Shelley said. “The only way we will be able to compete with teams of this caliber is to have nine guys grinding out at-bats.”

And grind they did.

“Once we get all nine putting in work,” Auker said, “I don’t see how we can lose.”

Auker has altered his stance (specifically his foot placement), which has enabled him to drive the ball. And overall Shelley has emphasized selectiveness at the plate – each guy finding a pitch he can handle and making solid contact.

Dillon Good pitched six innings to earn the victory for the Mounts, but was nicked for a run in the first on an RBI triple by losing pitcher Michael Geesaman, a play that saw Geesaman gunned down trying for an inside-the-park homer. Ephrata center fielder Adam Schwartz recovered a ball hit over his head and fired to shortstop Nate Fassnacht, who in turn relayed the ball to catcher Justin Carvell for the putout at the plate.

“They only got one,” he said. “They could have gotten two. We avoided the crooked inning.”

Ephrata took the lead for good (and for Good) by scoring twice in the second. With one out Gallagher walked and Auker singled. One out later Frees drove in a run with an infield hit, and with the bases loaded later in the inning Geesaman hit Fassnacht with a pitch, forcing in the run that made it 2-1.

Gallagher added an RBI double in the third, after which he moved to third on a wild pitch and scored on the first of Auker’s sac flies. And in the fifth the Mounts tacked on three more runs. The first came home on a wild pitch by Jared Dunkle, the second of three Falcons pitchers. Auker then produced his second sacrifice fly, and Storb drove in Gallagher, who had legged out a bunt single, with a fielder’s choice bouncer. The gave Ephrata a 7-1 lead.

Good, who struck out five, walked five and hit a batter, gave way to reliever Matt McGillian after loading the bases with none out in the seventh. Geesaman, who stung the ball all night, drove in one run with an infield out, and Tyler Frederick plated another with a sacrifice fly.

“We said the (playoff) format creates he most fragile environment to compete under,” Shelley said. “If you start to buy into seeds, you play yourself into a trap.”

The same might be said of a team that buys into batting-order slots. Especially on this night.