NEFFSVILLE - When Mitch Long is right on the mound - and he most certainly was on Monday afternoon - the Annville-Cleona baseball team can hang with anybody.

Annville Cleona's Mitch Long was called upon to start the Little Dutchmen's league playoff opener and could toe the rubber again in their first district game on Wednesday.(Photo: Michael K. Dakota, GametimePA)Buy Photo

NEFFSVILLE - When Mitch Long is right on the mound - and he most certainly was on Monday afternoon - the Annville-Cleona baseball team can hang with anybody.

But while Long was superb in the L-L quarterfinal battle with the mighty Mounts at Manheim Township, his pitching opponent Dillon Good was, well, great.

A-C's ace lefty scattered five hits and struck out six in six strong innings, but Good trumped that effort by firing a four-hit shutout and driving in a pair of runs to push Ephrata to a 3-0 victory and a berth in Tuesday's semifinal round.

Now 13-7, the Little Dutchmen will be idle until they open the District Three Class AA playoffs next week with, hopefully, the same Mitch Long that toed the pitching rubber on Monday.

"He certainly deserved better," A-C coach Scott Shyda. "He did exactly what we hoped he would do today. No walks, five strikeouts, five hits. You can't ask for anything better than that."

Except maybe some run support, which wasn't happening with the efficient Good on the mound tying A-C in knots with quality breaking stuff that produced six strikeouts of his own and an answer to promising threats the Little Dutchmen put together in the first, third and sixth innings. 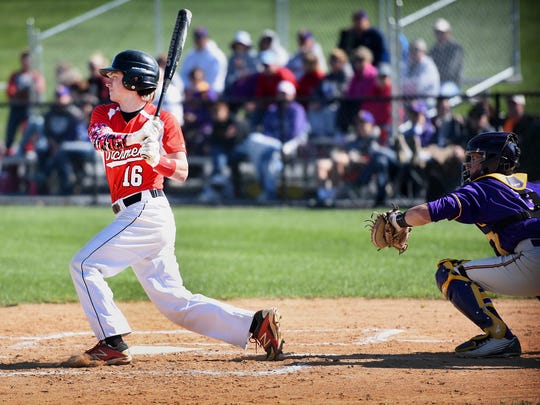 Good also gave himself the only run he and his teammates with a first-inning sacrifice fly that followed Nate Fassnacht's booming one-out triple to center - one of the few hard-hot balls against Long on Monday.

"I thought both pitchers pitched equally well," Ephrata manager Adrian Shelley said. "A couple of our balls found green and that ends up being the difference."

As did some key A-C mistakes in the sixth that gave the Mounts some needed cushion.

In the top of the frame, a Hunter Long single and a Ben Rita walk put the tying and go-ahead runs on base with two outs, but the threat died on an ill-advised attempt to move up to third on a wild pitch by the courtesy runner that replaced Long.

Then, in the home half of the frame three A-C errors and Good's RBI single helped push the Ephrata lead to 3-0.

"We fell apart a little bit there at the end," Shyda acknowledged, "but we have no reason to be hanging our heads, losing to a team like that. We knew this was gonna be tough and I'm proud of our guys."

"Our scouting report was dead-on, which was they were gonna be scrappy and play us for seven innings" Shelley said of A-C. "That's what they did. They've got a nice team, their pitcher did a really nice job."

The Little Dutchmen now must try to summon a similar effort in the district tourney, where it turned in a disappointing performance a season ago.

But again, with Long likely to take the ball for the district opener, A-C should be a tough test for its next opponent and any team it faces going forward.

"We have a lot to build on from this. I think this was a positive," Shyda said. "We will be prepared. We didn't like the way we exited last year, so we are anxious to get going again." 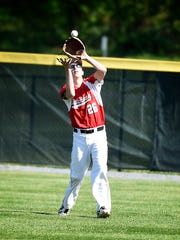 Annville-Cleona rightfielder Tyler Schrader records an out by grabbing this fly ball to the outfield. (Photo: Michael K. Dakota, GametimePA)