They're grown men now, flirting with age 50 and balancing careers, families and the many other responsibilities that the real world has thrust upon them.

The 1986 Annville-Cleona baseball team that captured the Class AA state championship reunited on Thursday night to mark the 30th anniversary of their memorable title run. 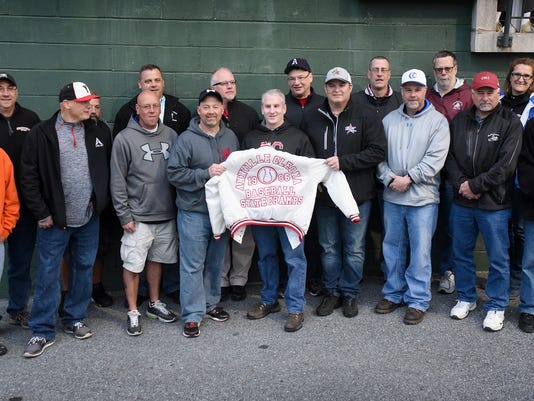 The 1986 Annville-Cleona state baseball championship team was honored in between the third and fourth inning of the current A-C team's game vs. Tulpehocken at Wenger Field on Thursday night. marking the 30th anniversary of the championship. Players pose for pictures after being recognized during the game.(Photo: Michael K. Dakota, Lebanon Daily News)Buy Photo

They're grown men now, flirting with age 50 and balancing careers, families and the many other responsibilities that the real world has thrust upon them.

But every so often - like Thursday night - they're transported back to a simpler time, when playing ball and playing for each other and their small, tight-knit community was all that really mattered.

It can't be 30 years already, can it? Ah, but it can be and it is three decades since the 1986 Annville-Cleona baseball team captured the imagination of their school and their hometown with a thrilling run to the PIAA Class AA state championship.

It all culminated on June 13, 1986 - Friday the 13th, for that matter -  with a 9-7 win over Ford City in the title game at Shippensburg University. Thursday night the Little Dutchmen of yesteryear paused to turn back the clock to that special day, reuniting as part of the current A-C baseball team's Senior Night matchup with Tulpehocken at Earl Wenger Field.

The team sat together during the contest, then was introduced to the crowd and honored prior to the top of the 4th inning. They're a little older, grayer and heavier, but they're still the champs.

"It seems like yesterday," said the coach of that special team, Mike Capriotti, prior to Thursday night's contest. "It was a special year, it really was. A lot of people say, 'What was the best team you ever had?' That's really hard for a coach to answer because there's different variables that go into deciding what's good, what's not good. But this was a group of guys that did not ever quit and they were more relaxed than I was. They were very confident and a close-knit bunch of guys."

They were also, according to third baseman Dave Gingrich, just a regular bunch of guys. Yes, they had a star player in sophomore pitcher/ outfielder Gavin Osteen, who went on to a 13-year career in professional baseball that peaked at the AAA level, and a four-year starter in catcher Mike Elliott, but mostly it was a ordinary group that accomplished something extraordinary. Even while mourning the loss of a close friend just weeks before their state run.

"We just had a bunch of normal guys that enjoyed playing ball together," said Gingrich, now the head football coach at Cocalico,"and we got hot at the right time. One of our classmates, Jeff Gibson, died on May 3 of that year. He was a good friend of a lot us. He wasn't on the team, but he was a good friend and he died in a car accident and after that, for whatever reason, we got hot."

A-C qualified for the state tourney as the third-place team in District Three with the help of a pair of come-from-behind victories early in the postseason, then proceeded to make memory after memory in states, none more fixed in their consciousness than Osteen's spectacular diving catch in center field to preserve a 10-9 victory over Salisbury in the semifinals.

The '86 state champs receiving recognition on their 30th anniversary. pic.twitter.com/WuTmtEUfXA

"The championship game was awesome. The one before it was pretty good, too," said shortstop Steve Miller. "Only winning 10-9 with that catch by Gavin. Unbelievable. It was over if he didn't catch it. When he caught it, I was like, 'Oh my God.' I just ran and dove on him. Pretty awesome."

Even if it did cost them some of the other perks of their teenage years.

"I had just graduated, I was supposed to be on Senior Week," Miller said. "And I'm at home playing in states. I didn't even care about Senior Week. I paid for it and didn't go."

"We had an awesome time. Just friends, all playing together and playing hard. We weren't the best team always, But we always played hard and fought and never gave up."