FREDERICKSBURG - Not three innings had passed Tuesday night at Wenger Memorial Field when a sense began to settle in with the falling sun behind third base. Taking home a win was going to require more than simply well-executed baseball.

Cam Shaak knocked out two RBI singles and Michael Deleon and Danny Caricabeur combined to throw for 10 one-run innings in the Cedars' 2-1 win at Northern Lebanon on Tuesday, May 3. 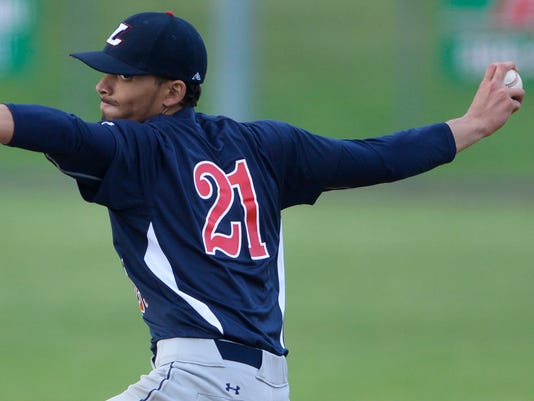 FREDERICKSBURG - Not three innings had passed Tuesday night at Wenger Memorial Field when a sense began to settle in with the falling sun behind third base. Taking home a win was going to require more than simply well-executed baseball.

Seven regulation innings may not suffice, either.

Then, 10 frames later, the price of victory proved to be toughness.

The kind that fires a borderline 3-2 pitch with the bases loaded in the bottom of the eighth. The resolve necessary for snaring an inning-ending fly ball in the ninth, moments after committing an error that put a potential game-winning run on second. The grit to knock out RBI singles in the exact moments your team needs them most.

The toughness clothed in the blue and red of Lebanon High.

Four innings after plating a game-tying run, Cedars junior Cam Shaak brought home the game-winner in the top of the 10th, lifting Lebanon to a 2-1 win at Northern Lebanon. Michael Deleon struck out 14 Vikings before handing the ball off to senior Danny Caricabeur, who stranded runners during all three frames of relief. Northern Lebanon starter Seth Walmer pitched five-plus perfect innings, before yielding consecutive infield singles and then Shaak's first RBI single in the sixth for a 1-1 game.

The Cedars (10-7, 8-5 Section Three) now remain in the hunt for the postseason thanks to their season sweep of the Vikings.

"It just shows just how tough these kids are and how much they want to fight back to where they need to be," Lebanon coach Mike Toomey said. "To gut out a game like this in an atmosphere like this, it makes me as a coach proud to be their coach. I'm proud of them, but it makes me feel very privileged to coach guys like this."

Northern Lebanon catcher Chase Dubendorf smashed an RBI single in the bottom of the fourth, the second of four Viking runners to reach in the frame. However Deleon (7 IP, 1 ER, 6 H, 14 K, 3 BB) eventually bore down and struck out Hayden Johnson looking to close the frame at a 1-0 deficit. The Cedars fireballer next went on to punch out six of the remaining 11 batters he faced.

"I was just giving it all I got," Deleon said. "Danny had my back, Shaak did with the hitting ... We have each other's backs and we came back."

Lebanon's comeback efforts would have been for naught had Caricabeur not secured a full-count third strike against Hunter Voight in the eighth, when a ball would've handed Northern Lebanon the game. Then it was Cedars back-up outfielder Jorge Garcia keeping his team afloat by snagging a two-out fly ball in the ninth and dropping a key sacrifice bunt early in the 10th to set up Shaak.

Northern Lebanon's Seth Walmer fired a four-hitter Monday at Elco, lifting the Vikings to a 3-0 win in the penultimate game of their regular season. Jeremy Long, GameTimePA
Fullscreen

Northern Lebanon's Hayden Johnson hugs Chase Dubendorf (6) after he knocked in a run during a 10-inning loss to Lebanon late in the regular season. Jeremy Long, GameTimePA
Fullscreen

"We did everything we needed to do to win, and they did the same thing," Hess said. "And sometimes you just don't win it."Those plays ultimately added up to the small difference in what otherwise played out as an even game in the mind of Northern Lebanon skipper Daryl Hess.

And lastly came Shaak strolling to the plate with a simple mindset in the most pressurized of spots.

"Just put the ball in play, go with the pitch," Shaak said. "Just make something happen out of it."

Something that just happened to unfold as the greatest win of his high school career?