Northern Lebanon's Isaac Wengert pitches during the Vikings' 3-0 win over Elco on Wednesday. He allowed only five hits and no walks.(Photo: Vicki Vellios Briner, GameTimePA)Buy Photo

NL earned its first section win of the campaign following three losses, to improve to 3-4 overall. Elco slipped to 3-3 (3-2 L-L).

The Vikings pushed a cross a first-inning run, then Wengert made it stand up the rest of the way by pitching a gem: a complete game, five-hit shutout with seven strikeouts. He did not walk a batter.

Wengert’s clutch effort was the perfect tonic for coach Daryl Hess’s squad, which had lost four straight after opening the season with consecutive victories.

“He hit his spots, changed speeds and did a nice job,” Hess said of his starter. “He was around the plate, and even when he got behind 3-1 to a couple batters he came back and got them to avoid giving up the walk.

“This was a huge win for us because, first of all, we got our first win in the section and secondly, they’re a very good ball club over there and they have a good record.” 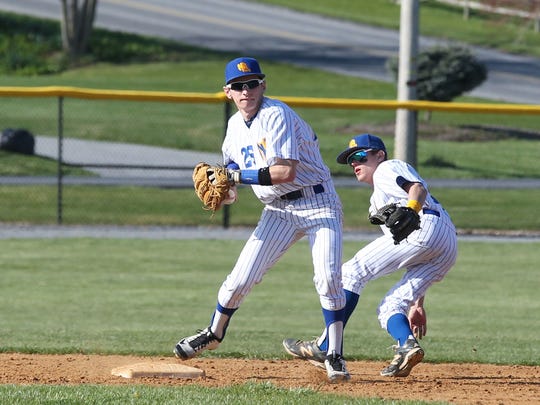 Northern Lebanon shortstop Noah Gingrich gets ready to finish off a double play during a 3-0 win over Elco on Wednesday. (Photo: Vicki Vellios Briner, GameTimePA)

The Vikes scored a pair of huge insurance runs in the bottom of sixth off Elco starter Tyler Price, who nearly matched Wengert pitch for pitch for five-plus innings. The rally for breathing room started with one out, when Chase Dubendorf walked and moved to second on Michigan Daub’s single. Seth Walmer plated Dubendorf on an RBI knock, then Ryan Biever drove home Daub on a sacrifice fly to center field.

“Adding those runs on in the sixth inning was huge,” Hess said.

Price also went the distance, giving up those three runs on four base hits. He struck out three and walked three.

Elco’s best chance to dent Wengert happened in the top of the fifth, but it died at home plate.

Nate Hostetter doubled to deep right center, then moved to third on Cody Good’s single. Joe Ginder tapped a comebacker in front of Wengert, who shoveled the ball home to catcher Dubendorf just in time to nab a sliding Hostetter. 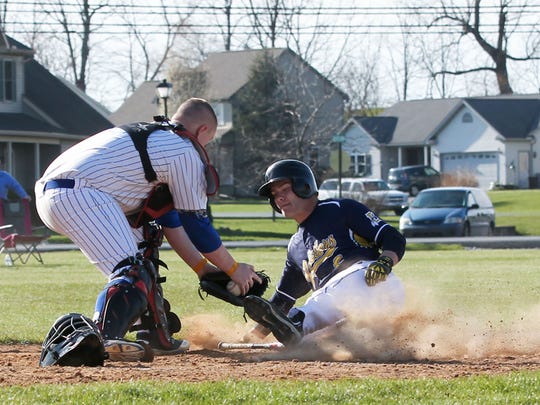 The play was a significant one in Elco’s long view. Not only did it keep the Raiders off the board, but it extended a scoreless streak that, two frames later, reached 17 innings.

Against Wengert, several Raiders took called third strikes on fastballs. If hitting is contagious, the opposite can certainly occur. Elco’s plate approach on Wednesday looked cautious and frozen at times, something Elco coach Chris Weidner hopes doesn’t become a trend.

Weidner said, “Last week we went 3-0 because we scored early and let our pitching do the job. Price labored a bit today, but he did enough that it was only a 1-0 ballgame heading into the sixth inning.

“We’ve been taking too many called thirds (strikes) and I’ve never tolerated that too well. You get locked up on a breaker periodically, but if you’re watching fastballs go by, nothing good can come of it. You hit it, something good can happen. So yeah, it’s frustrating. It has to be corrected."