Shippensburg’s Cameron Tinner, left, attempts to pull his leg out from the grasp of Michael Wolfgram of Central York, during the 285-pound final at the District 3 Class 3A wrestling championships on Saturday, February 25, 2017. Wolfgram won 14-5.(Photo: Kerri Fleegle, For GameTimePA.com)Buy Photo

Chandler Olson may have had an inkling of what he was getting into Saturday morning, and teammate Cameron Tinner might have had some thoughts like that, too.

But it's likely neither of the two Shippensburg stalwarts had any idea how they would be dominated on their feet during their bouts in the District 3 Class 3A wrestling championship round at Giant Center.

Olson was taken down 10 times by Exeter Township ace Austin DeSanto in a 22-10 loss, while Tinner surrendered six takedowns in a 15-4 defeat to Michael Wolfgram of Central York. Both were a bit shocking in how strong their opponents looked.

DeSanto's only loss in the last two years came in last year's PIAA finals against two-time world champion Spencer Lee, so his stature is well-known. But Olson may not have given up 10 takedowns in the last two years combined. And Wolfgram, although heavier, was just as quick as Tinner, which neutralized Tinner's main advantage against other 285-pounders.

BITTER ENDING: Whenever a good wrestler's high school career finally ends - unless it's on top of the podium at states - it's usually tinged with some sadness. 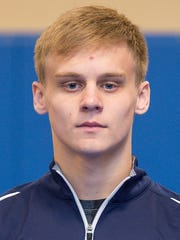 But the way Chambersburg senior Aaron Rump's season ended Thursday afternoon seemed unfair. In fact, he believes it was unfair.

During the skin check at weigh-ins before the District 3 tournament began, the doctor examining Rump saw something under his hairline, ruled that Rump had a rash and disqualified him from the tournament.

"It was a bad situation and a bad call," said Rump on Monday evening. "I had it checked by a doctor (in Chambersburg) during the week. He said it was acne, treated it and it cleared up in a day. I don't know why the other doctor didn't see that."

Rump, who appeared to have a very navigable path to the district final and his second straight berth in the PIAA Tournament, admitted that he "was really upset about it" Thursday night.

"Now I'm just trying to be positive and focus on school," he said.

Rump said he has had a few offers to wrestle in college, but is undecided about his plans. He finished with a 29-6 record this year and had a sparkling career record of 128-31.

GETTING THERE: Waynesboro has not been much of a factor in several years at the district tournament, but the Indians had five qualifiers this time and made a little noise, going 7-11 as a team.

Senior Seth Egolf was 3-3 with three pins, sophomore Matt McCann reached the semifinals at 120 and went 2-2, and junior Dalton Mowen and freshman Adam Wertz both went 1-2. Wertz was fifth in sectionals, but was added when one of the top four placers dropped out.

Waynesboro's Adam Wertz, top, takes Rylan Zerance of West Perry to his back during a 138-pound consolation match at the District 3 Class 3A wrestling championships on Thursday, Feb. 24, 2017 at Giant Center. (Photo: Kerri Fleegle, for GameTimePA.com)

Wertz was involved in perhaps the wildest bout, a 16-15 win in the first round of consolations over Ryan Zerance of West Perry. Wertz went ahead 4-0, but was reversed to his back for a 5-4 deficit after one. In the second, Wertz scored six points, but Zerance totaled eight, so Wertz trailed 13-10.

He gained an early escape in the third, and took Zerance down to his back for five points and a 16-13 lead with 20 seconds left, giving him a cushion for Zerance's late reversal.

ODDS AND ENDS: Shippensburg 106-pounder Jeffrey Russell suffered a tough loss one win away from placing in the top six. Protecting a 5-4 lead on his feet late vs. Cedar Cliff's Cole Baer, Russell did a smart thing and shot in on Baer's leg, which could have used up the clock. But Baer hit a desperation spladle and caught Russell for a pin with six seconds left.

Cole Grove of Chambersburg lost an 8-3 decision to Christian Schilling of Garden Spot in the quarterfinals when he was reversed to his back in the third period with the score tied 3-3. They met again in the bout for fifth place, and Grove dominated in a 7-1 victory.

For the third time this season, Ship 195-pounder Cole Forrester dropped a close decision to Blake Barrick of Big Spring, this time 3-1 in the semifinals. Although Forrester is taller, Barrick seems to be able to use his lower body strength and tie-ups to keep Forrester from getting any deep shots.