Chambersburg's Aaron Rump, right, takes control of Connor Finkey of Garden Spot during the Championship finals of the Carlisle Wrestling Tournament inside Carlisle's gym on Saturday Dec. 12, 2015, in Carlisle, Pa. Rump wins the 132 title. Up 5-0 at the end of the second. Noelle Haro-Gomez -- GameTimePA.
Fullscreen

Chambersburg's Spencer Runshaw (top) tries to stay in control against Jared Loose of Hemperfield during the Championship finals of the Carlisle Wrestling Tournament inside Carlisle's gym on Saturday Dec. 12, 2015, in Carlisle, Pa. Loose won at 113 pounds. Noelle Haro-Gomez -- GameTimePA.
Fullscreen

Chambersburg's Garrett Kyner, top, grapples with Tucker Brough of Big Spring during the Championship finals of the Carlisle Wrestling Tournament inside Carlisle's gym on Saturday Dec. 12, 2015, in Carlisle, Pa. Kyner takes second after a 3-2 defeat at the hands of Brough. Noelle Haro-Gomez -- GameTimePA.
Fullscreen

Shippensburg's Cameron Tinner stays in contol over Muhamed Alic of Carlisle during the Championship finals of the Carlisle Wrestling Tournament inside Carlisle's gym on Saturday Dec. 12, 2015, in Carlisle, Pa. Tinner wins a 7-1 decision in the 220 bracket against Alic. Noelle Haro-Gomez -- GameTimePA.
Fullscreen

CARLISLE -- When Aaron Rump came off the wrestling mat Saturday evening, it was a few minutes before the Chambersburg junior could celebrate his gold medal.

That's because his face was wrapped with layers upon layers of gauze and tape. His nose was bleeding profusely, and he avoided losing by injury default by less than a minute.

At 132 pounds, Rump claimed a 7-3 decision over Garden Spot's Connor Finkey to earn the victory at the 54th annual Carlisle Holiday Wrestling Tournament. He won despite having his face taped up to the point where it was covered from the bottom of his eyes down, with a small hole left for his mouth.

"He was just banging my head hard, and obviously, I started to bleed," Rump said. "It sucked because I couldn't breathe out of my nose. I had to focus on keeping my head in better position, too, because it was kind of pulling my neck down a little bit. But I just had to get through it, grind through it."

Rump was one of four local victors Saturday. Teammate Drew Peck claimed the 195-pound title, while Shippensburg got victories from Chandler Olson (126) and Cameron Tinner (220).

Scoreless after the first period, Rump scored the majority of his points in the second. Finkey started on top, but Rump quickly escaped. He then scored a takedown and a pair of back points before the period's end.

"He was really at risk with losing it on blood time," Trojan coach Matt Mentzer said. "I think it gave him a little urgency to get scoring some points. He hit a real nice duck-under (in the third) to clinch the match. It was a challenge for him, and he handled it very well."

Rump said, "In the beginning of the match, I was just kind of distracted because my nose was bleeding and we kept having to stop the action. Once he took that shot (in the second) and I countered it, I felt like I had position. I was so happy to get the win; I would've been really upset if I didn't."

Peck also walked away quite pleased with himself. He avoided a late scare to defeat Big Spring's Blake Barrick, 3-1. It was Peck's first time winning the Carlisle title, and he did it at 195 pounds -- a weight up from where he usually wrestles.

Peck used an underhook to score a takedown early, and he rode that momentum to the narrow victory.

With about six seconds left, Barrick shot low on Peck's legs and nearly took him to the mat, but Peck held him off until the clock ran out.

At 220 pounds, Tinner scored a flurry of points early but then also had to hold off his counterpart, Carlisle's Muhamed Alic, in a 7-1 verdict.

"Muhamed is a really good wrestler; he's good from the top and has a nice cradle," Tinner said. "That's sort of why I didn't choose bottom, but I also felt confident on my feet that I could get a couple takedowns. I thought I really got in on my shots, finished my moves and did what I needed to do."

It was Tinner's second gold medal in as many tournaments so far this season. 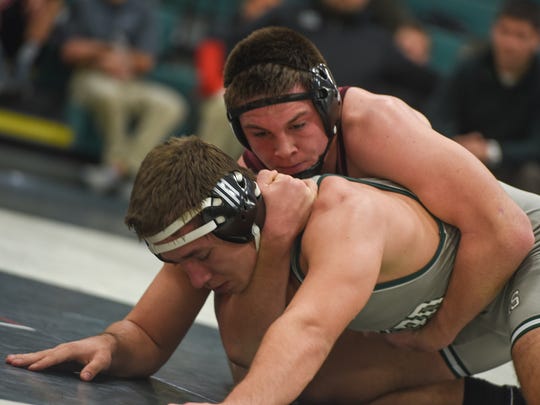 Shippensburg's Cameron Tinner stays in contol over Muhamed Alic of Carlisle during the Championship finals of the Carlisle Wrestling Tournament inside Carlisle's gym on Saturday Dec. 12, 2015, in Carlisle, Pa. Tinner wins a 7-1 decision in the 220 bracket against Alic. (Photo: Noelle Haro-Gomez -- GameTimePA.)

His teammate, Olson, wanted to avenge last week's loss at the Cumberland Valley Tournament, and he did just that. Olson also scored a takedown in the early going, then had to fight off Bermudian Springs' Austin Clabaugh for a 5-0 decision at 126 pounds.

"The key to that match was just staying in position and wrestling at my pace," Olson said. "He's a tough scrambler, and he's good at catching big-hitting moves. I had to stay in position and make sure the pace was moving the way I wanted it to."

There were several other local highlights. Chambersburg's Garrett Kyner was a bit disappointed with his final match, but he did place second overall. He was defeated by Big Spring's Tucker Brough, and it was a false start against Kyner that cost him a point in a 3-2 decision.

"We only brought 12 kids, and two of those guys are just getting their first varsity experience this season," Mentzer said. "So, we came with basically 10 kids and put nine of them on the (medal) stand. They hustled, scored points and got some falls this weekend, so I was real pleased with the overall effort."

Cole Forrester also picked up a third-place medal. He won a 5-2 decision at 195 pounds.

Bryan Eckenrode had Greencastle-Antrim's highest finish. He captured fifth place at 106 pounds by pinning Nathan Townsley, of West York, in 4:50.