Chambersburg beat State College 3-1 for its first win of the season. 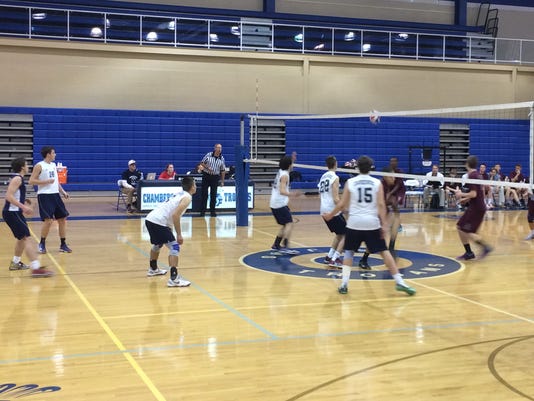 In the first set between the Chambersburg and State College boys volleyball teams, the only sound to be heard were from fans, and the thud of the red, white and blue ball bouncing from hand to hand.

"We just need to wake up in the first game," Chambersburg middle blocker Landon Miller said. "Once we get that, the chemistry definitely comes back."

"Our passers and back row were talking and our offense came alive," Chambersburg coach Marta Cummings said. "All the pieces came together."

Although State College kept it close in each set, Chambersburg (1-1, 1-0 MPC) used a cushion to open the third and fourth games, in which the Trojans went up 5-0 in the final two sets.

"We rose to the occasion," Cummings said. "We were down and a little flat in game one but we were able to get some momentum, and keep a little cushion for us. Whenever the going got tough, we stepped up and showed some heart, which is good since we lacked that last week."

Despite that quick 5-0 jump to start the fourth game, State College battled back to make it close and threatened a five-set match by taking a 24-22 lead late. But a few Little Lions errors and a pair of back-to-back blocks by Riley Washington and Evan Misal created the final two points of the match.

Watch the final three points that put Chambersburg up 28-26 in the fourth set against State College to lock in the Trojan's first win of the season.

"Late in the game what killed us was three unforced errors back to back," State College coach Kim-Le Kimel said. "In a two- to three-point game that's going to kill us."

Miller, along with Washington, had a good day at the net, each with six blocks and 10 kills. Dalton Strite padded the stat sheet with 17 kills, two aces and 11 digs, while on the service line, Dylan Culler had four aces.