The Rockets fall to No. 1 seed Wyomissing, but took 3rd place Thursday to qualify for states for 1st time ever 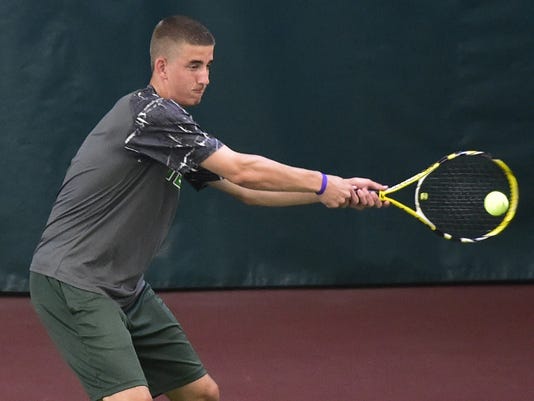 James Buchanan's No. 3 singles player Hunter Sowers returns a shot last week in a first-round District 3-AA win over Donegal. On Wednesday, Sowers was the Rockets' only winner in a 4-1 loss to Wyomissing.(Photo: Markell DeLoatch, GameTimePA.com)Buy Photo

The James Buchanan Rockets knew what awaited them when they arrived at Hershey Racquet Club on Wednesday afternoon for their District 3 Class AA team tennis semifinal match.

The opponent was small-school terror Wyomissing (13-0) - as close to vintage New York Yankees, historically, as any team in any sport in District 3. The defending champion Spartans feature newly-minted district singles champ Dan Trifoi fronting, with fellow semifinalist Sergio Sanchez-Perez backing at No. 2.

Wednesday’s 4-1 verdict read as expected, but it was anything but a one-hour cakewalk. The Rockets managed to grab a court at No. 3 singles and turned what many expected to be a short outing into a 2 1/2-hour one.

In a spring full of program history-making, more can be made on Thursday. The Rockets (14-5) will take Lancaster Mennonite (10-4) – losers to Lancaster Country Day in AA’s other semifinal, 3-1 – in the third-place match at 11:30 a.m. at HRC. If JB wins, the Rockets will earn the first PIAA berth in the program’s history.

There was discussion Wednesday evening that Mennonite might be forced to forfeit the match with JB, due to AP testing at the school on Thursday. But late Wednesday, the Blazers announced that they will play the match. It has been reported that they may forfeit the Nos. 2 and 3 singles matches.

“Winning our first team match at districts the other day, was history,” Rockets coach Terri Beegle said. “When we won it, we knew that we’d be playing back for a chance to go to states. So we’re gonna fight for No. 3. We’re going to give our best shot against whoever we play. We knew that Wyomissing was going to be a very uphill battle.

“These guys are psyched. They laugh at me when I say it’s a magical season. But it is.”

“We just had to grind it out,” said Sowers, a sophomore. “It was back and forth the whole match. It would come down to who could break who first, and I got it done at the end.”

The loss to Wyo eliminated JB from title contention, but it also perpetuated a theme with Beegle’s crew this spring: There’s plenty of big fight in this small(ish) dog.

“We put up a battle,” Beegle said. “A lot of games went to deuce several times. We didn’t back down. Chance (Wishard) and Isaac (Shenton) knew what they were up against and they won a few games and that was big for them.

“Hunter’s win was huge. It was a great match to watch. Tiebreaker both sets, then a super-tiebreaker to decide it that goes 10-8. Hunter battled back, and that’s what he does. He keeps it in play.

“You’ve got to play the best to get better.”

Both doubles matches finished up at nearly identical times, which sealed the win for Wyo. Izaak Weaver-Herrera and Ben Croft defeated JB’s Josh Summers and Micah Wise 6-2, 6-1; Owen Pendergast and Will Schreck did likewise to Jalen Ayers and Luke Leidy by a 6-3, 6-1 count.

James Buchanan defeated Lancaster Mennonite 3-2 on Thursday morning to capture third place in the District 3 Class AA boys tennis tournament. That gave the Rockets (15-5) a berth in the PIAA Tournament for the first time ever. States begins Tuesday.

Lancaster Mennonite forfeited at No. 2 and 3 singles because of a conflict with testing at school. When JB's No. 1 doubles team of Josh Summers and Micah Wise won 6-4, 7-6(5), it clinched the match.

"They were good matches to watch," Rockets coach Terri Beegle said. "Micah played very well - he was the hero today. He moved his shots around and kept us in the match."