After a week-long delay to the start of the boys tennis season for Chambersburg and James Buchanan, the teams will finally hit the courts. Also, check out these top five things to watch this week.

Lower Dauphin is led by pitching ace Ava Bottiglia, and the Falcons advanced to last year's District 3 Class 4A championship. But the Maidens, who went from 5-15 in 2015 to 13-7 last season, return all but two starters and are looking to make noise in the Mid Penn Colonial Division.

It doesn't get any easier for Waynesboro, which turns around Monday to head to Chambersburg for the Trojans' season-opener at Norlo Park.

Fannett-Metal at Forbes Road baseball, 4:30: A local showdown starts the Sideling Hill League/Inter-County Conference baseball and softball season on Friday, and the baseball game should be a close one.

Both Fannett-Metal and Forbes Road return a lot of talent. The Tigers boast five returning starters and have a few underclassmen to watch out for. Cole Funk, who was last year's No. 1 pitcher, also returns. 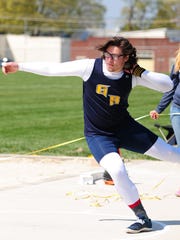 Tim Cook Memorial Track & Field Invitational at Chambersburg, 10 a.m.: After being the midway point of the 2016 season, the Tim Cook Invite is back to kicking off the track & field season.

Last year, Franklin County took home seven gold medals from Tim Cook, and all but Evan Vink return as defending champions. For Greencastle-Antrim, Campbell Parker was the victor in the shot put and the discus, while Chambersburg's Abby Yourkavitch (1,600) and Kaylee Mowery (3,200) were individual and relay winners. McConnellsburg's McKenzie Gelvin was last year's gold medalist in the 400 with a meet and school record.

Scott Folmar directed Chambersburg to a 6-14 season, and now must deal with the loss of senior leadership such as Carlin Christian and Austin Suders. Chambersburg host its season opener against non-conference opponent Hamburg this season.

As a sophomore, Cover was seventh in the state with a score of 457.9, but after the score he posted at this year's District 3 Championships, Cover could be hunting down an even higher medal. At districts, Cover was second with a new school record of 523.80.