Check out the Top 10 plays of the non-league boys basketball game between James Buchanan and Fannett-Metal. 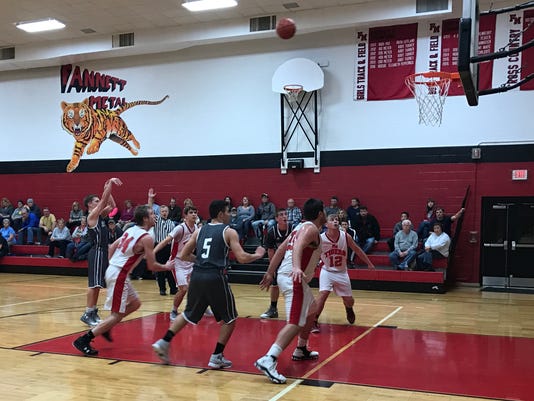 The Rockets claimed a 78-58 victory over F-M for their second win in a row thanks to almost five scorers putting up big numbers against the Tigers.

Jared Pine led James Buchanan with a career-high 21 points, followed by Hunter Reath with 19, Micha Wise with 13 - both career-highs - and Hunter Sowers with 11. And despite having the daunting task of guarding the area's leading scorer, Mikell McGee, Owen Stoner also contributed nine points for the Rockets (5-11).

"That's tough to stop having more than one guy in double figures, and I think Stoner did a great job guarding McGee," James Buchanan coach Larry Strawoet said. "McGee is a nice player and he creates a lot of offense and Owen accepted that challenge."

McGee finished with game-high 24 points while Lucas Wingert scored 12 for the Tigers (7-7).