Greencastle-Antrim's Jared Rohrbaugh dribbles the ball during a boys soccer game against Northern York on Monday, Oct. 17, 2016. Rohrbaugh scored a pair of goals in the Blue Devils' 7-0 victory. Nate Bacon, For GameTimePA.com
Fullscreen

Olivia Gardenhour did not make it easy on herself.

But she didn't let the pressure get to her and as a result, the Waynesboro senior earned a berth in the PIAA golf championships next week at Heritage Hills in York.

Chambersburg sophomore Karsen Rush was not quite as fortunate at the PIAA Eastern Regional tournament at Golden Oaks Golf Club in Fleetwood on Monday. Rush shot 78, which was three strokes behind the number needed to advance to states.

"I just got off my game a little and got sideways," Rush said. "Maybe this is incentive for next year."

Gardenhour shot an 82, as did four other players - Belle Keopraseut of Emmaus, Chelsea Park of Wissahickon, Kendel Abrams of Susquehannock and Liddie McCook of Downingtown East. That created a five-way tie for 10th place, and only the top 12 golfers qualified for states.

"I've never been in a playoff like that," Gardenhour said. "I just tried pretending that I was out playing with my friends."

One girl was knocked out on the first hole, and two more on the second hole, so Gardenhour knew she had qualified. But she went on to win the playoff on the fifth hole to earn 10th place.

Waynesboro coach Ryan Henderson said, "On the first playoff hole, Olivia had to make a tricky downhill slider putt for par to stay alive and she did. On the fifth hole, she made par and the other girl had a double bogey.

"I give Olivia a ton of credit. She was not feeling well all day and somehow she found the strength to persevere and make it to the state championships. She is a senior and has reached the pinnacle of high school golf. It's a great way to end her career."

Gardenhour scored one birdie and had three doubles in her round.

"The greens are big and fast, so putting was definitely the key," Gardenhour said. "It took a while to get used to the speed."

Rush placed in a tie for 28th, with the top 24 golfers advancing. He made a pair of birdies on the front nine, but shot 1-over, then followed with a 41 on the back side.

Fannett-Metal 1, Everett 0: The Warriors came into the game unbeaten, but a red-hot Fannett-Metal side had different ideas. Mikell McGee scored a goal after a pass from Kyler Goshorn with 6:23 left to lift F-M to the victory - their fifth straight.

“This was a double ‘S’ game for us,” F-M coach Greg Best said. “We needed a significant win and a statement win and we did that today. We played a different formation and the kids played it well. We played behind the ball a lot, but we got good chances, too.”

On the scoring play, Goshorn lifted a ball over the defense that McGee ran onto it. He and Everett goalkeeper Joseph Koontz arrived at the same time, collided, and the ball trickled across the goal line.

Greencastle 7, Northern 0: Greencastle-Antrim piled on the offense in a Mid Penn Colonial Division win over Northern York to complete the regular season. Jared Rohrbaugh and Josh Kline each had a pair of goals for the Blue Devils (13-5, 11-1 MPC), while Brandon Stuhler added a goal and an assist. Avery Wenger and Taylor Noblit also netted one each. 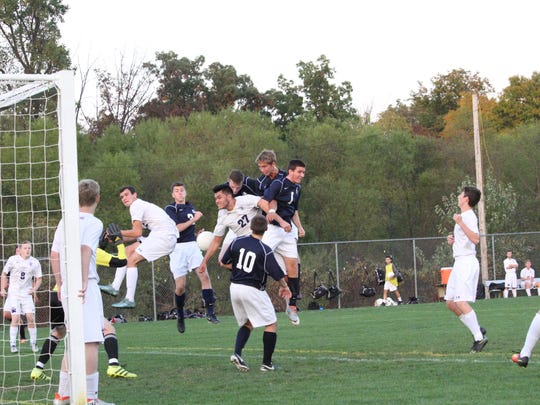 McConnellsburg 3, Hyndman 1: Despite trailing by a goal at halftime, McConnellsburg stormed back to earn a non-league victory over Hyndman. Landon Seiders led the Spartans (13-2-1) with a goal and an assist, while Nic Culler and Gage Henry also netted tallies for McConnellsburg. The Spartans limited Hyndman to just seven shots and six corners.

Chestnut Ridge 5, Southern Fulton 2: The Indians (8-7, 6-4 SHL) held a 2-0 lead at halftime, but the Lions roared back for the Sideling Hill League win. Chase Varner and Benjy Voight and Casey Spade was credited with an assist for SF.

Clear Spring 3, McConnellsburg 1: Morgan Kendall scored just before halftime to even McConnellsburg’s non-league score, but the Blazers netted a pair of goals in the second half to ensure the victory. The Spartans (8-6-1) finished with just six shots and didn’t have a corner kick all night. Goalkeeper Kellyn Perry collected 15 saves.

James Buchanan 3, Milton Hershey 0: After dropping two in a row, James Buchanan got back to its winning ways with a non-league defeat of Milton Hershey. Tyana Quivers led the Rockets (11-6) both offensively and defensively, putting up eight kills and eight digs. Rachel Manikowski smacked six kills, and Sarah Blair contributed seven digs and 11 assists.

Greencastle 3, Gettysburg 0: Greencastle-Antrim reeled off its fifth straight victory, holding Gettysburg to 21 points or fewer in all three sets of the non-league match. Chloe McKenzie had a dominating day in the front row, recording a team-leading 15 kills. Keri Gearhart notched 13 kills, four blocks and eight digs for G-A (9-6), and Baylee Schaeffer had six kills and five digs.

Chambersburg 1, Mechanicsburg 0: Chambersburg ended the season on a high note, earning a narrow non-league win over Mechanicsburg. Meghan Sharpe scored midway through the first half, and the Trojans (9-7-1) made it stand up. Rachel Dusman was credited with the assist. Ari Burke collected five saves for her sixth shutout of the year.