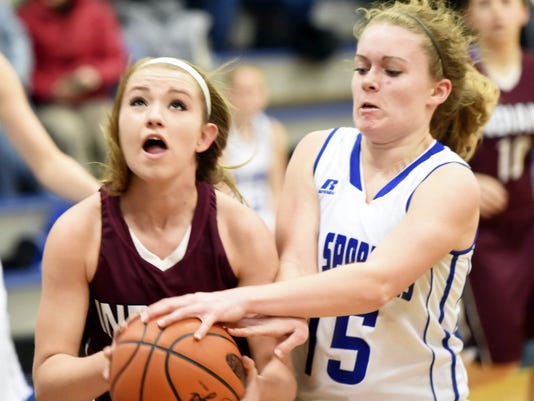 Outlook: "We would love to repeat a district championship, but it's difficult to win one, let alone two," Rhine said. "It seems like our schedule is loaded with talent. I think we can be a dangerous player in the postseason, but there is a lot of basketball to be played and to be learned until then. I'm sure my top three will say we're going back to the Giant Center. All a district championship means this season is a big target on our back."

Notes: The Blue Devils lost two starters in Katie Gelsinger and Jane Herman, and with the same starting lineup on the court for the last two years, adding two younger players into the mix will be a challenge. At the end of the first week of practice Rhine said the fifth starter still had not emerged from a pack of underclassmen.

Outlook: "We are definitely going to better our record from last year," Lauthers said. "We want to make playoffs and be seeded higher than last season. We're looking to try to be higher district wise and also league wise. Obviously the goal is to beat everyone twice, and the teams that we lost to last year we'd like to make up for."

Notes: The Rockets will be without Taylor Gorman, the team's starting center. Gorman injured her ACL in the final weeks of the soccer season, and will require surgery. With a core of 15 underclassmen, younger players will have to step up to fill the void early.

Outlook: Markel said, "In all reality, we are trying to flip our record this year. We want to start off strong and we want to go from 7-15 to 15-7, which I think is totally feasible. Most importantly, we need to be competitive in every single game, and give ourselves a chance to win -- It's all you can ask for."

Notes: Between varsity and JV, just 17 athletes came out for the Lady Hounds, but Markel vows that the low turnout will never happen again. The second-year head coach expects this year's squad to play like family. "Our underclassmen have been playing together pretty much since third and fourth grade," Markel said. "They are a lot more close in age and they have a stronger bond on and off the court. They will go to war with each other more, and they have a lot more cohesiveness."

Outlook: "We want to build on what we did last year. There were growing pains last year with a new coach and the kids; now it's growing pains with the program," Steiger said. "It would be nice to have a set varsity and set junior varsity rosters, but the starters are juniors now and they have that much more experience. They're more confident than they were last year, and more comfortable with me and what we are trying to do."

Notes: Steiger is working with a young roster of just 18 players between varsity and JV, with no seniors. With a core of junior starters returning, and a limited number of bench players -- which include five freshman that will dress for both varsity and JV -- the Maidens will have to learn on the fly, but the second-year head coach believes that it will give the younger players valuable experience.

Outlook: "I'd like to win 15 games and to make it past the first round of districts," Seville said. "The first year coaching, my goal was to get to a playoff game, then we wanted home court advantage. We did that, so now we have to get past the first round and see where it takes us from there. We certainly have some girls that can get us there, I just hope we can get through the season without any injuries."

Notes: Three girls who played a considerable time last year did not rejoin the Lady Spartans for the 2015-2016 season. With just 11 players total between varsity and JV, the entire team will likely see time on both teams.

Outlook: "The overall goal for us is to not only become a family, but to also win District 5," Raville said. "A lot of these girls have never experienced the hard work of getting to a District 5 championship game, and with that hopefully we experience states."

Notes: In her first year as head coach, Raville said the first few weeks of practice was a challenge thanks to the culture shock of a new coaching staff. She said the new staff is trying to push the program and get the girls out of their comfort zone.

Season opener: Saturday, away at Berlin, 3.

Outlook: "If we can keep the girls on the court without foul trouble or injuries, I think we are going to be competitive," Gelvin said. "We've been preaching to them that we have to play smart. We can not afford injuries or sickness -- that will be the key."

Notes: Forbes Road field hockey standout Maiah Mellott was working in the off-season to join the Cardinals on the court, but injured her ACL in the final game of the field hockey season. That leaves Forbes Road with just six players on its roster.

Outlook: "We are hoping to take our play to the next level this year," Best said. "We had a lot of girls working hard in the offseason. We had very good attendance in summer clinics and summer leagues and the girls are really dedicated to turning the program around."

Notes: With no seniors, the team will be  led by a host of sophomores and juniors "melding" together under Best's coaching philosophy. Also, with four freshman on the team, Best said it is likely that a freshman or two will start for the Tigers.

Other top players: Kaitlyn Provard (so.).

Outlook: Sanders said, "I would like to improve our defense and become stronger, and mentally tougher. We want to be able to get better at getting the rebound."

Notes: The Blazers will start their season with injuries plaguing their already small roster. A core of four freshman will outweigh the rest of the roster, which has just nine players. The freshman additions to the team had considerable experience in the middle school program, but will have to make adjustments to play at varsity speed.

Outlook: "We've been very good the last number of seasons, and even without Tori (Yoder), there is a lot of talent behind her to help us," Eby said. "I think we will be very strong in the division and we want to go back to the championship. Everyone knew the talent that Tori was, but what the other people in the league don't know is there were a lot of good people behind her. They have something to prove in the league, so they're pretty motivated to say, 'We know we have to step up.'"

Notes: With five sophomores on the roster, Eby expects large contributions from at least four of the 10th-grade players. With Yoder's void on the roster, Brooke Emge has emerged as a productive tandem with Lydia Harris.

Outlook: "We don't have a very deep bench, but our starting group is really strong. Technically, we really only have one varsity player who is new to the program, so we have less to learn," LaRue said. "We aren't very deep, so that is our biggest weakness. But our biggest strength is that most of our returning kids improved, so we have a lot of opportunity if we stay healthy and show up to play every game."

Notes: Mercersburg begins the season with just nine varsity players, an ongoing struggle for the Blue Storm, but with an experienced core of returning starters who have improved in the off-season, LaRue expects the team to match, or improve last year's 16-6 record.

Season opener: Saturday, away at Westtown, 1.