Trojans use 5-run fourth inning to defeat Upper Darby, 7-2, in first round game.

Trojan teammates celebrate the final out in a 7-2 win over Upper Darby. Chambersburg played the Royals in the first-round of the PIAA Class AAAA softball championships on Monday at Shippensburg University.(Photo: Markell DeLoatch, GameTimePA.com)Buy Photo

One nightmare inning for Upper Darby made for a dream game for Chambersburg.

The Trojans used a five-run fourth inning that included three hits, three errors, a hit batter, a walk and a wild pitch, to take command of a PIAA Class AAAA first-round game Monday afternoon at Shippensburg University's Robb Field. In front of a large, friendly crowd, Chambersburg eventually emerged with a 7-2 victory over the Royals.

In the quarterfinals on Thursday, site and time to be determined, the Trojans (23-4) will take on Mid Penn Commonwealth Division foe Mifflin County (18-5), which toppled Lower Dauphin 6-4 in the first round.

"We were putting the bat on the ball today," Chambersburg coach Chris Skultety said. "We preached hitting it on the ground and making them make the plays. They did make a lot of them, but when they didn't, we got it rolling and then everything started happening."

Upper Darby coach Christina Tomczuk said, "We don't normally throw it around like that. But we thought they'd try to do some things to try to throw us off our game, and it worked. After that five-run inning, it's hard to come back from that."

Trojan pitcher Laken Myers had an excellent game, allowing only five hits and one walk and striking out five. Both of the Royals' runs were unearned, but it did stake them to a 2-0 lead after 2 1/2 innings.

"My changeup wasn't working - at least for strikes - so I went to other pitches, and the screwball worked pretty well," Myers said.

Upper Darby put two on the board in the second thanks to some sloppy play by the Trojans. A single by Brooke Jones and an error put two runners on. An errant pickoff throw attempt at second base moved the runners up and Jones scored on an illegal pitch by Myers. Keri Anne McGee then smacked an RBI single off Myers' glove.

Skultety said, "Sometimes when we make a mistake, it snowballs and we make more. But we didn't think two runs would win the game, and Laken got stronger as the game went on."

The Trojans got one run in the third when Lexi Leedy doubled down the right field line and eventually scored on a ground single to left by Leah Hunt. 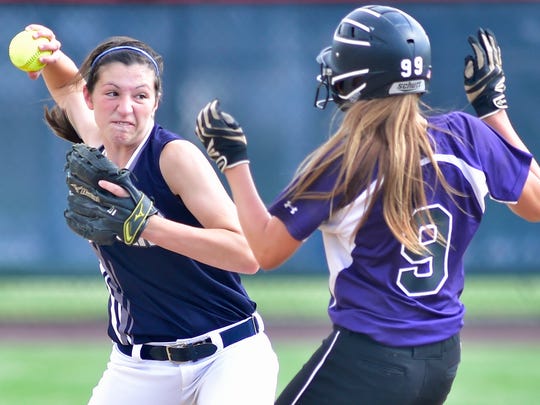 Chambersburg's Maggie Myers fires the ball to first base to complete a double play after getting the runner, Carli Benozich of Upper Darby, out at second base. The Trojans beat the Royals 7-2 in a PIAA first-round game Monday. (Photo: Markell DeLoatch, GameTimePA.com)

Then came the decisive fourth. Sammie Bender was hit by a pitch and Katie Overcash walked, and the bases became loaded when Caeley Etter reached on a bunt hit.

Leedy, who was 2-for-3 in her first game back in the lineup after dealing with an injury to her finger, said, "I hadn't played (for the Trojans) for a while, but I had played over the weekend and I was seeing the ball really well. We did get behind, but we figured we could come back like we usually do.

"Once we started hitting the ball solid, that put the pressure on them."

"We call her 'Scrappy' for a reason," Skultety said.

Chambersburg added an insurance run in the sixth when pinch-hitter Alyssa Wenger reached on a third-strike wild pitch, stole second and raced home on a base hit by Maggie Myers.

Skultety said, "This was probably the biggest crowd they've ever played in front of, and I thought they stayed pretty loose and handled it pretty well. This team has some mental toughness.

"I don't want this to end yet, because these girls are fun to be around."

NOTES: Hunt and Leedy each had two hits for the Trojans ... Carli Benozich had two for the Royals, who finish 21-4 ... Skultety wanted to thank the VFW for the team's lunch before the game ... Chambersburg turned a 6-4-3 double play in the top of the first.