Trojans focused on themselves ahead of state 1st round

Chambersburg believes playing its "own game" will be the key to success vs. Upper Darby

Trojans focused on themselves ahead of state 1st round 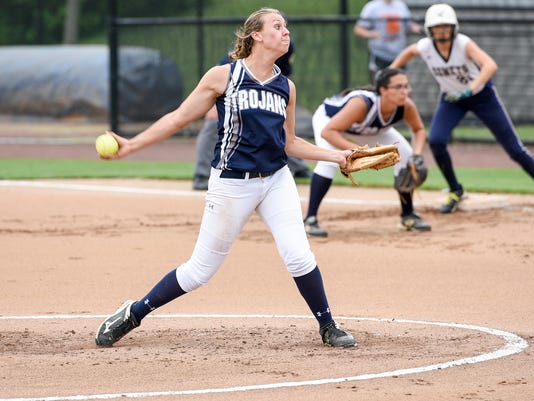 Laken Myers pitches for Chambersburg during the District 3 Class AAAA softball championship. Myers is once again expected to start on Monday when the Trojans take on Upper Darby in the opening round of states.(Photo: Noelle Haro-Gomez, GameTimePA.com)Buy Photo

All season long, Chambersburg's softball team has been preaching the motto: "Stay within yourselves."

That strategy won't change Monday afternoon when the Lady Trojans meet Upper Darby in the first round of the PIAA Class AAAA tournament.

While Upper Darby fell to the fourth seed out of the District 1, which forces the Royals to hit the road for Shippensburg University for a 4:30 start time, they were actually the top seed in the district tournament before a few upsets.

Regardless of seeds or records - Upper Darby is 21-3, compared to Chambersburg's 22-4 - Trojan coach Chris Skultety isn't concerned with his opponent.

"Right now, I don't know too much - they have an average pitcher and a couple really good hitters," Skultety said. "But we're just preparing to play our game, that's the key. We'll throw strikes, try to hit the ball and play good defense. Games like this, you just gotta prepare your team."

While Upper Darby does have three players batting over .400 - Carli Benozich (.509), Alexandra Witmer (.427) and Samantha Witmer (.419) - Chambersburg may have the pitching staff to combat that.

Starting catcher Caeley Etter has not been cleared to play after a neck injury, so Sam Bender will likely have to spend her time behind the plate. Laken Myers is expected to get the starting nod, with Leah Hunt ready for relief duties.

"We also have Katie (Rosenberry) who could come in to catch," Skultety said. "But Sam has done a phenomenal job the last two games. I'd really love to pitch her, but her arm in shutting down the running game is a weapon itself. I can't emphasize how important of a job she's done stepping in there."

Chambersburg's Tara Harmon throws the ball to Sammie Bender earlier this season. Bender has filled the role of catcher for the last two games and is expected to do so again in Monday's PIAA opener. (Photo: File, GameTimePA.com)

Throughout the year, Chambersburg's pitching staff has solidified itself as one of the strongest around, so Skultety once again emphasized how important the defensive effort would be. Defense was certainly the name of the game in the Trojans' District 3 championship, and he's hoping for more of that. The Trojans will also use the weekend to focus on more patient batting, in hopes that those three things will make a recipe for success.

"Defense is gonna be key, and not allowing a bad inning," Skultety said. "You can have one bad inning in states, and you're coming home. We also gotta be more disciplined at the plate. Fifteen popups is ridiculous; those are easy outs. We gotta hit the ball on the ground, but I'm real confident in my team."