For the first time since 2004, Chambersburg is headed to the District 3 Class AAAA softball championship.

From the first pitch Tuesday afternoon, Lower Dauphin looked like it might get the best of Chambersburg again.

Kaylee Stoner and Kayla Holl led off with back-to-back singles, and both of them got into scoring position on a sacrifice bunt from Maddie Lilliock. But the Trojans turned a double play to get out of the inning unscathed, and from there, they never looked back.

Chambersburg did just enough offensively to grab a 3-0 victory in the semifinal matchup, and for the first time since 2004, Chambersburg is headed to the District 3 Class AAAA softball championship game.

"Laken (Myers) came out here and pitched her butt off," Trojan senior Tara Harmon said. "When you have a pitcher working her tail off, you have to have a defense that's willing to make plays behind her.

Chambersburg's Dori hits the ball and drives in a run during a District 3 Class AAAA softball semifinal against Lower Dauphin on May 31, 2016. Chambersburg defeated Lower Dauphin 3-0. Noelle Haro-Gomez, GameTimePA.com
Fullscreen

Chambersburg's Leah Hunt slides back into second base as Kaylee Stoner goes to catch a ball and tag out Hunt during a District 3 Class AAAA softball semifinal on May 31, 2016. Chambersburg defeated Lower Dauphin 3-0. Noelle Haro-Gomez, GameTimePA.com
Fullscreen

The Lady Trojans get pumped up before the new inning during a District 3 Class AAAA softball semifinal against Lower Dauphin on May 31, 2016. Chambersburg defeated Lower Dauphin 3-0. Noelle Haro-Gomez, GameTimePA.com
Fullscreen 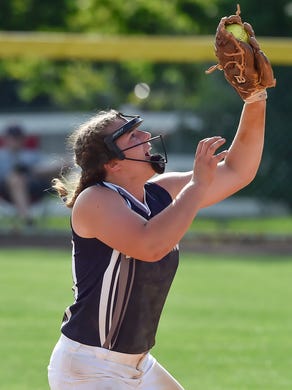 "That's what we did, and this was probably the best defensive game we've had. It was a total 360 turn from the last game we played against Lower Dauphin, and we couldn't be happier."

With the win, Chambersburg (21-4) will face Penn Manor (22-3) in the championship on Thursday, at a time and place to be decided. "I think the biggest key to the game was to shut down the first inning," Chambersburg coach Chris Skultety said. "Once we shut that down and got that double play, they really didn't threaten at all. Laken was untouchable today."

Myers was a huge factor in the victory. With an injury to starting catcher Caeley Etter, Sammie Bender went behind the plate to catch for Myers, and the pair had a stellar effort. Myers scattered four hits, and allowed only one other Falcon to get into scoring position after the first frame.

"Caeley, 'The General,' was hurt, and I was really going to start (Sam) today, but Sam is a good catcher," Skultety said. "They were clicking, and once we got the first run, the team was confident. We have people that we can plug in, and it's an awesome feeling. It's like having keys to a brand new car and having all these new gadgets to play with."

LD coach Joel Schreiner said, "We've scored a lot of runs all year, but it was just one of those games that happen when you have two good teams. It's the kind of game that I told the girls, if we played them 10 times a year, it might be five each."

Leah Hunt and Dori Loukopoulos were the driving forces in Chambersburg’s offense. Hunt scored two of the team's three runs. She got the party started with a double in the fourth inning that was followed by an RBI single from Loukopoulos, and Hunt smashed her eighth home run of the season in the sixth inning.

"I think (LD pitcher Ava Bottiglia) just got behind in the count and had to come at me," Hunt said of her home run. "I'll be honest, I've been dreaming of that hit ever since the first time we played them (in a 6-3 loss)."

Loukopoulos also notched the game’s only other RBI after Tara Harmon smashed a double to leftfield to give Chambersburg its 3-0 cushion.