And then there were four.

The field of play in both the District 3 Class AAAA and Class AAA softball playoffs have been narrowed down to just four, and in both brackets, a local team remains standing.

Although the matchups are similar in importance, they're different in a lot of ways.

On Tuesday, Chambersburg has a rematch with Lower Dauphin to determine who will head to the AAAA Championship, while Greencastle-Antrim faces the unknown in a meeting with Garden Spot in AAA.

Not only are the opponents quite different - Lower Dauphin is a seasoned playoff team; Garden Spot had not won a District 3 game until this year - but the implications are also contrasting. Regardless of the outcome, the Lady Trojans have already punched their tickets to states, while the Blue Devils still need to get over a hump that sent them packing a year ago. Only the top three teams in 3A advance.

"The girls, they know what's at stake, but I don't think there's that much pressure," G-A coach Mark DeCarli said. "We were in the same situation last year; they just need to stay focused. We're always battling to the last out every time."

Chambersburg (20-4) recently suffered a setback in the form of a loss in the Mid Penn Conference championships, but it actually may have been a blessing in disguise. The loss came at the hands of the Falcons (22-2) and ace pitcher Ava Bottiglia, who is almost certain to start again.

"We'll definitely see her again; she's their star," Trojan coach Chris Skultety said. "We know she can throw the rise ball, and we just have to be better disciplined. Our girls will be ready, and if they can get a ball in the strike zone, they can hit anything."

The Trojan pitching staff is certainly no easy ride, either. Skultety said either Sam Bender or Laken Myers will get the nod, with reliever Leah Hunt expected to see some time. There's a chance all three girls will get time in the circle, and the Trojans will rely heavily on catcher Caeley Etter to guide the pitching staff to a victory. 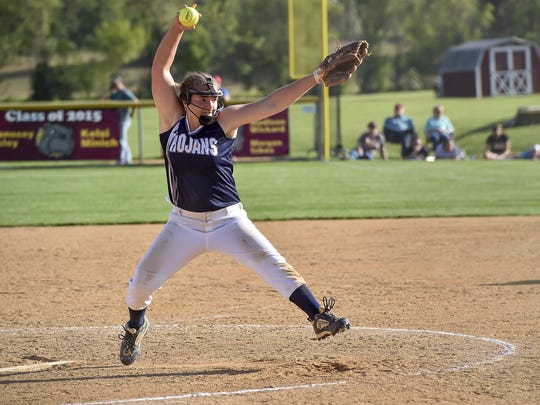 Leah Hunt pitches for Chambersburg during the Mid Penn Conference championships. Although Sam Bender or Laken Myers is expected to start in Tuesday's semifinals against Lower Dauphin, Hunt may get the call for some relief duties. (Photo: Noelle Haro-Gomez, GameTimePA.co)

"The general, Caeley Etter, we've learned a lot from her," Skultety said. "There's great communication with her between me and coach (Emily) Estep, and it's nice to have someone out on the field that knows what she's talking about." 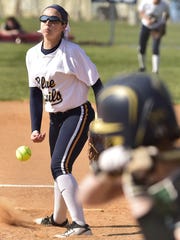 Ally Brown is expected to start in the circle for Greencastle on Tuesday, when the Blue Devils take on Garden Spot in the District 3 Class AAA semifinals. (Photo: Markell DeLoatch, GameTimePA.com)

Like Chambersburg, Greencastle (17-5) has a solid pitching staff in Ally Brown and Liz Ward, and boasts a strong hitting corps. Brown is expected to get the nod on Tuesday, due only to the fact that the Blue Devils have established a strong rotation.

Garden Spot (14-7) is led by Taylor Martin, who surpassed 500 career strikeouts this season and is also the team's strongest hitter.

One stat is particular would certainly seem to give the Blue Devils an advantage - the Spartans averaged just 4.0 runs per game in the regular season; Greencastle is scoring an average of 9.3 runs a game and has scored less than four runs just four times this season.

"Playing good defense is going to be key," DeCarli said. "We know if we hit the ball, we'll be fine. We'll keep putting pressure on the other team, bunting, moving girls around, so if we play solid defense, we should be fine."

Teams: Chambersburg is the No. 1 seed and is currently 20-4, while Lower Dauphin (22-2) is seeded No. 4. The Falcons defeated Chambersburg once this year.

Blue Devils-Spartans at a glance