Garden Spot somehow finished on the wrong side of a no-hitter but on the right side of the scoreboard Monday. 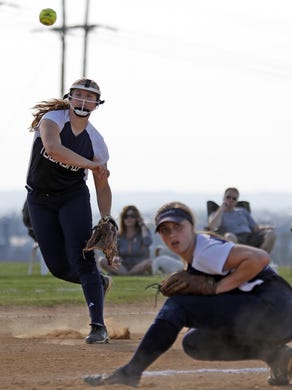 Manheim Township's Reilly Gearhart makes the throw to first for the out against Garden Spot's Abby Foor at Garden Spot High School in New Holland on April 25, 2016. Kirk Neidermyer, for GameTimePA
Fullscreen

Manheim Township's Reilly Gearhart gets a hit late in the game at Garden Spot High School in New Holland on April 25, 2016. Kirk Neidermyer, for GameTimePA
Fullscreen

NEW HOLLAND — Only in an old-fashioned pitchers’ duel can both pitchers prove themselves winners.

That said, the Spartans of Garden Spot somehow finished on the wrong side of a no-hitter but on the right side of the scoreboard Monday afternoon at Garden Spot High School, taking a must-win contest versus Manheim Township, 2-0, behind senior Taylor Martin’s shutout effort.

Despite finding hits elusive versus Blue Streaks’ ace Reilly Gearhart, the Spartans (9-4 overall, 7-3 L-L) rallied for two runs in the bottom of the first inning, taking advantage of a walk and a pair of passed balls with aggressive base-running for all the support Martin would need.

“It was a full team effort all the way around,” said Garden Spot head coach Ashley Mansfield. “We ran the bases decently; they have a great pitcher. We just got lucky and that’s all you can say.”

Martin led-off the bottom of the first inning with a walk, moving to second on Elizabeth King’s one-out bunt. Spartan hitters Brandi Clark and Sydney Nichols followed with 0-2 swings and misses, finding themselves on base when the third strike found the backstop.

The second time, catcher Nicole Moldenhauer’s throw to first base lipped out of Mikayla Brennan’s glove at first base, allowing both Martin and Clark to score on the play.

Garden Spot somehow finished on the wrong side of a no-hitter but on the right side of the scoreboard Monday, April 25, 2016.

Garden Spot’s closest thing to a hit came in the sixth inning when King’s grounder in the five-six hole was scooped up by Streaks’ third-baseman Casey Martin, but a low throw permitted King to be safe.

A fielder’s choice two batters later put runners on the corners before Gearhart picked up her tenth strikeout and Moldenhauer made a great grab of Abby Foor’s foul popup on a bunt to end the threat.

Even so, the Spartans finished with a pair of walks, two sacrifices, four attempted bunts and four stolen bases to make the most of their opportunities.

“Being aggressive, bunting the ball. You put the ball in play, make things happen, put the pressure on them,” Mansfield said.

Meanwhile, the Blue Streaks (5-9, 3-7 L-L) finished with a hit in all seven innings but couldn’t find a way to shake the goose egg.

Mikayla Brennan and Samantha Zimmerman each had two hits for the Streaks, including Zimmerman’s leadoff double in the sixth inning. A sacrifice hit moved Zimmerman to third, but a strikeout and Andrea Acosta’s liner to second base ended the threat.

“When I have runners on ... I kind of zero-in a little bit better,” Martin said, crediting her defense on getting out of each inning. “I don’t think we had any errors. One-hundred percent play as a team and win as a team.”

Martin, who dealt her curveball and changeup combo in matching Gearhart’s ten strikeouts, walked just one batter in the complete game victory.

What with Solanco’s 2-0 victory over Section One leader Hempfield, it was a necessary win for the Spartans to keep pace in Section Two.

“Looking forward, we have no game that’s easy from here on out,” Martin said. “No game is ever easy, you have to bring it every game (and) every pitch.”