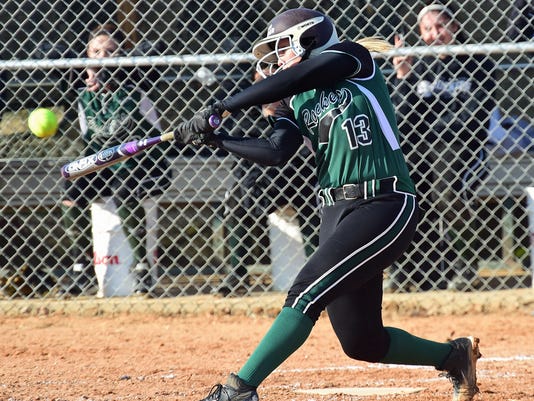 James Buchanan's Taryn Miller, who was one of the area's top pitchers a year ago, may not start on the mound this season due to injury concerns. But the Rockets will still have her at the plate and in the field at shortstop.(Photo: File, GameTimePA.com)Buy Photo

It's going to be a whole new game in Franklin and Fulton counties this softball season.

Not only are six of the area's 10 softball coaches on their first year at the job, there is also some unexpected pitchers not returning to the game.

Graduation cost Mercersburg Academy its top pitcher in Sydney Reath, who was the 2015 Public Opinion Player of the Year. But there will be two big surprises in the circle.

James Buchanan's Taryn Miller, who was in the running for last year's top honor, may not pitch for the Rockets this year. She suffered a back injury last season, and as she is committed Division I Robert Morris, she does not want to risk re-injuring herself, according to JB coach Troy Pittman.

Also not returning to the softball is Southern Fulton's Olivia Mottern, who is focusing her energies on basketball, according to Indian coach Melissa Mackel.

Both Pittman and Mackel are first-year head coaches. They join Chambersburg's Chris Skultety, Forbes Road's Pete Hall and Mercersburg's Doonie Brewer as first-year coaches. Also nearly new to the game is Waynesboro's Aaron Burke, who served as the Maidens interim coach for the latter half of the 2015 season.

It may be a season of firsts in the area, but these teams are ready to get back out on the diamond.

Shippensburg's softball team returns a lot of talent and will look to make a run at the Mid Penn Colonial Division title. (Photo: File, GameTimePA.com)

Southern Fulton is one of many softball teams that will have to adjust to a new coach and a new pitcher this season. (Photo: File, GameTimePA.com)