Although Olivia Gardenhour has been playing golf since she was little, she did not compete in high school right away.

Although Waynesboro's Olivia Gardenhour has been playing golf since she was little, she did not compete on the high school golf team until her sophomore year. But it didn't take long for her future on the course to map itself out.

Gardenhour has verbally committed to continue her athletic career at Central Connecticut State University as a member of the Division I women's golf team.

"I've always been told as a girls golfer that there were a lot of opportunities, but it doesn't really hit you until you're a senior how many opportunities there are," Gardenhour said. "I wasn't looking at the school, but the coach approached me and when I went up for a visit it felt like the right fit. The team is pretty good and I like the school and girls on the team just clicked."

She was offered an athletic scholarship and will sign her official letter of intent in March. 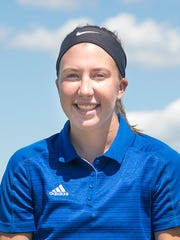 "I played all summer and just got in a lot of practice out at the golf course," Gardenhour said. "All the time spent out there, I consistently kept my scores in the low 80s, high 70s.

"My favorite part of this season was definitely the five-hole playoff to make it to states. It was pretty nerve wracking, but I think I stayed pretty calm."

The improvement between her junior and senior years was apparent - she dropped three strokes from her 2015 average to lead the Waynesboro golf team with an 82.8 average in 2016.

Gardenhour plans to major in elementary education at Central Connecticut, one of the top programs offered at the institution. The Blue Devil women's golf program competes in the Northeastern Conference.

Gardenhour is also a varsity starter for the Waynesboro girls basketball team. Although Gardenhour does not know when she will report for Central Connecticut for preseason, she plans to hit the links to begin preparing for her college debut after basketball season is over.