HARRISBURG >> It came down to a single stroke, and Chambersburg freshman Karsen Rush was the man holding the... 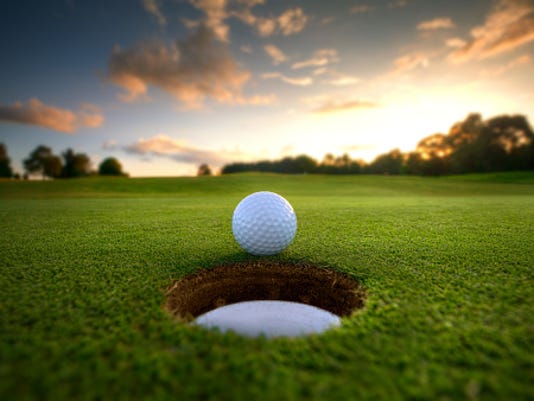 HARRISBURG >> It came down to a single stroke, and Chambersburg freshman Karsen Rush was the man holding the putter.

When Rush brushed in a 10-foot putt for birdie on the first playoff hole Monday afternoon at Dauphin Highlands, the Trojans edged Cumberland Valley to capture the Mid Penn Conference golf championship.

"It was a downhill, left-to-right putt and I thought I'd hit it too hard," Rush said.

But it hit the center of the cup and dropped in, giving the Trojans the league title and a berth in the District 3 Class AAA Team Championships on Tuesday at Briarwood East.

Rush said, "It was neat because the team won and we got to celebrate."

Chambersburg and CV each totaled 303 strokes in regulation. Teams designated five players as scorers and the best four accounted for the team total. The Trojans put all five in the 70s – Rush shot even-par 72 to place second in the individual event behind CV's Davis Clarke (71), Shaffer was seventh (76), Ian Patterson tied for eighth (77), and Luke Ocker and Tom Shearer each shot 78 to tie for 11th.

In the playoff, which was on the par 4 No. 1, Patterson and Ocker went out with two Eagles and all four players carded bogeys. In the second group, Shaffer and Rush played against Davis and Morgan Frazier. Shaffer and both CV players were already finished with pars when Rush made his winning birdie putt.

Trojan coach Mark Yost said, "I was very pleased and happy with the team, because this was something we had set in our sights. It was really stressful and going down to the wire when we were tallying the scores, and then in the playoff, too. Rush made the clutch putt, but we needed the whole team to grind it out today."

The five Chambersburg players all finished in the top 13. In addition, Evan Vink shot 81 to qualify for next weekend's District 3 individual tournament.

Two other area players advanced to districts. Waynesboro's Nick Franki posted a fine 75, which included birdies on No. 7 and No. 11, to tie for fifth place and Jacob Suder of James Buchanan shot 80 to take 16th place.

JB coach Mark Wise said, "I was very impressed with Jacob's score, from the standpoint that he had two bad holes and then recovered from both and kept himself on an even keel. I'm really looking forward to districts with him next week."

Also for the Rockets, Toby Sowers shot an 82 and was in a six-man playoff for the final three District 3 berths, but he was knocked out on the first hole.

"I was very proud of Toby for shooting his best round in a high school golf match in a pressure-filled tournament," Wise said. "It was good that he gave himself an opportunity."

Note: The top 23 players advance to the District 3 Tournament. Cooper, Smith and Wagner earned the last 3 spots in a playoff.