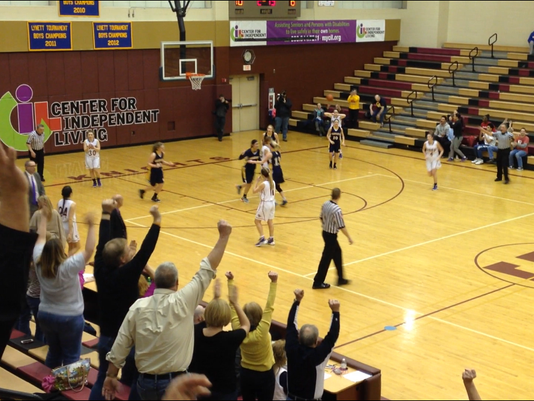 The Greencastle-Antrim girls basketball team punched its ticket to the second round of the PIAA tournament in dramatic fashion, with a 43-42 win over Scranton Prep, Saturday.(Photo: Lindsey Smith/GameTimePA.com)Buy Photo

SCRANTON - Most teams - if they shoot 4-for-28 in the first half, and fall behind by 15 points - would almost certainly begin cutting their losses.

But Greencastle-Antrim is not most teams. You can't count the Blue Devils out of anything.

After perhaps its worst opening 16 minutes of the year Saturday evening, things did not look good for Greencastle in the first round of the PIAA Class AAA girls basketball tournament against Scranton Prep.

But it just took one shot to turn it all around for the Blue Devils, who came back in spectacular fashion to beat the Classics 43-42 to move on to the second round of PIAA tournament.

By beating Scranton Prep (15-12), Greencastle (24-3) will play Gwynedd-Mercy (20-4), the District 1 champion, in the second round Wednesday, time and location to be decided. Gwynedd took down Bonner-Prendergast in the first round 58-31.

"One of us just had to make a shot," G-A's Jenay Faulkner said. "We needed to see a shot go through the rim."

After rallying to eliminate a healthy deficit, Greencastle held an uncomfortable two-point lead heading into the final minute of play with Crist at the free-throw line.

Her shot bounced off the rim and into the hands of Scranton Prep's Julia Sirotnrak and the Classics called a timeout.

Calista Kline jetted out of the huddle and made a 3-pointer, putting the Blue Devils down by one, but Crist was fouled with five seconds left and stepped to the line again, this time for two.

The Classics worked up the court and got off a shot that looked to be a sure thing, but Faulkner flew out of nowhere to make a spectacular block.

Now, inbounding with less than a second left on the clock, Scranton Prep took a last-ditch 3-point shot in the corner that seemed to float in the air for an eternity, but bounced off the near side of the rim as the final buzzer sounded, and a sea of blue and gold met at the center of the court.

"I think I could kind of tell it was short," Faulkner said, "but is still felt like forever."

"I've been having a hard time with my foul shots this year," Crist said. "But I just felt it on those (the last two)."

Greencastle coach Mike Rhine said, "I didn't anticipate a very good start, but I didn't think it would be that bad. The precedent has been set (this season) that we could (come back), but to be honest, who thought that was going to happen at halftime?"

"I was probably more mad than nervous," Crist said. "But It seems like the whole year, our third quarter we kind of go off and make all of our shots in the third quarter."

At the half, Greencastle was shooting just 14 percent from the field, but it all turned around when Crist got the ball in her hands in the third quarter.

She sank a free-throw shot to open the third, and followed with a 3-pointer off a forced turnover.

Greencastle duplicated that play twice more, forcing turnovers setting up a nine-point run which led to a 3-point parade. The Blue Devils drained six treys in the third frame, including a buzzer-beater by Faulkner to narrow the once-large deficit to eight to begin the final quarter.

Faulkner opened the fourth the same way she ended the third, draining a 3-pointer, setting off a 13-0 run for the Blue Devils.

"We told the girls that (Greencastle) was going to make a run, it was just a question of when," Scranton Prep coach Bob Beviglia said. "Fortunately, we had a lead and when they made the run and they didn't knock us out. They just made one more play than us at the end."

Faulkner finished the game with a double-double, scoring 20 points and grabbing 10 rebounds. Crist had 16 points and three steals.

Sirotnrak was the only Classic to score double figures, finishing with 15 points.