Shalom Christian shot 27.3 percent from the field, and Grace handed the Flames a 50-37 loss in the MDCC Championship 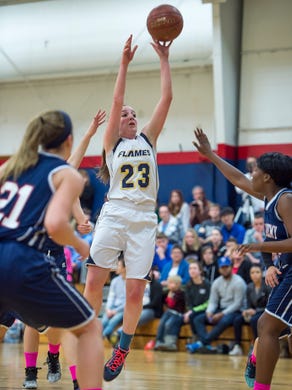 HAGERSTOWN, Md. - Many coaches will tell you that it's hard to beat a team three times in the same season.

After defeating Grace Academy twice during the regular season, the Flames weren't as fortunate when it mattered most. Shalom lost to the Knights, 50-37, in the Mason-Dixon Christian Conference championship.

"They played good defense, but it wasn't anything that we shouldn't have been able to handle," Shalom coach Brad Eby said. "We've played them I don't know how many times, and we come out on the better side often. But when you play a good team three times in a year, it's hard to get that third one. We did that last year, and to do it again this year, it was tough."

Grace (19-5) was playing for revenge, as Shalom defeated the Knights last year in the title game. Also, until Saturday, Grace had never won an MDCC championship. "I feel very excited and proud of my team," Grace junior Hannah Colvin said. "Last year, we faced them in final and didn't come out with the win, so this year, we were really determined. We wanted to put everything we had out on the court to get that win."

Although Grace did play a stifling defense, the Flames (22-2) were hindered by a horrid shooting percentage. They finished just 15-for-55 (27.3%) from the field and didn't help themselves at the line, where they went 4 of 8.

"We ran a simple 3-2, but it worked really well," Grace coach Larry Lorshbaugh said. "We put pressure on the ball and made them make mistakes. Hannah is a monster on defense; that's where she gets a lot of her energy, on missed shots or getting out on the break."

From the opening tip-off, Shalom couldn't seem to handle Grace's pressure. Colvin racked up 12 points in the first, and by the time the teams headed into the locker room at halftime, Shalom was playing catch-up big time. The Flames trailed 25-12 at the break. Shalom shot 5 of 30 from the field in the opening 16 minutes.

"It was really important to get that lead and keep our momentum going," Colvin said. "I really tried to focus on defending their point guard (Lydia Harris) and not letting them break us down in the middle like they have the last two times. Our team focused on cutting down that middle area and forcing them to shoot outside, and they were just off tonight from outside."

Despite a huge deficit heading into the final quarter, Shalom tried to make a game out of it, and it even pulled within 11, but it was simply too little too late.

"This does not define our season," Eby said. "We know what we're capable of, and you could still see that we're capable of playing with just about anybody. Things were just not falling. A lot of people have been gunning for us for a long time (Shalom was the two-time defending champ), and they found a chink tonight."

Notes: Harris led Shalom with 23 points, 13 of which came in the fourth quarter ... Shalom's Brooke Kuhns racked up 15 points ... Colvin finished with a double-double with 16 points and 10 rebounds, and Grace's Dede Wright contributed a career-high 12 points off the bench.