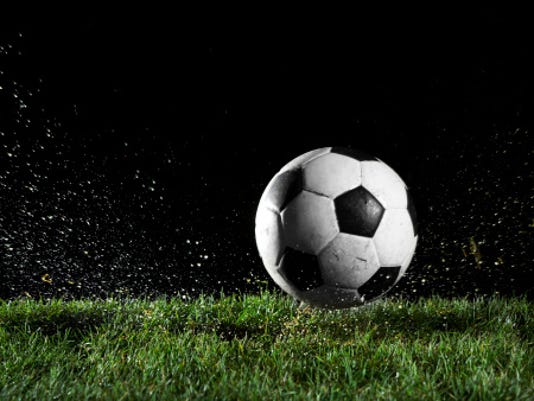 WILLOW HILL >> Heading into Saturday afternoon's District 5 Class A boys soccer quarterfinal against Hyndman, Fannett-Metal knew it needed to get off to a good start.

The Tigers were facing a team that had beaten them once in the regular season by using a frustrating defensive scheme.

"When they did beat us, they got two goals and packed it in on us," F-M coach Greg Best said. "We controlled the game, but we could never get in on their defense to score. I knew it was important to get the early lead."

Fannett-Metal struck first, just five minutes into the game, and took a two-goal lead into halftime. That strong start proved extremely important when Hyndman put up a fine fight in the second half, but the Tigers escaped with a 3-2 victory.

"We had a little bit of a scare there," F-M defender Wyatt Thorne said. "We let in two goals that were just miscommunications, but we held out for the victory. I wish we could've knocked a few more in the back of the net, but I'm glad we're moving forward."

Hyndman's sails were deflated early on when the Hornets suffered an own goal.

"One of our players, Alec Jesmer, put in a beautiful cross to Mikell McGee," F-M's Levi Brady said. "A boy just happened to jump in front of Mikell, and it deflected off the boy's head and into the net for an own goal."

Just over 10 minutes later, the Tigers struck again. Brady sent a pass to McGee just outside the 18, and McGee sent a fine shot to the far post, which sailed over the keeper's head.

"We came out flat," Hornets coach Scott Stouffer said. "This group is young, and I think there were a lot of nerves. They were real flat and almost disoriented in the first half. Those two quick goals got them down a little bit."

After McGee and Brady hooked for another score – this time, Brady had the goal, and McGee got the helper – Hyndman looked like a whole new team. The Hornets responded just two minutes after Fannett-Metal's third goal with a set piece. Jordan Kiser sent a corner into some high traffic in front of the net, and Spencer Messenger snuck in a goal just inside the right post.

"I think we got a little bit flat there, and when they got that first goal, momentum changed big time," Best said. "They started getting energy, and they started winning every 50-50 ball. They were keeping the pressure on us. We were trying to ride that 3-0 lead and we ended up having to fight to finish off the game."

With just under seven minutes to go, Hyndman got life again with a goal by Elijah Stair on a rebound.

"We got to the point where we needed to put the ball on the net and crash the net," Stouffer said. "We needed to play for the rebound. I call them junk goals, but there are a lot of them scored. You have to get those junk goals if you're going to win, especially in the playoffs."

Fannett-Metal did take back some of the control with shots by Layton Hoffmann and McGee in the final five minutes, and although Hyndman's Noah Stair made a defensive save on a wide-open shot, the Tigers did just enough to secure the victory.

"We were communicating better this game than we have all year," Brady said. "I also think our passing game, especially in the first half, was the best it's been all season, so I hope we can keep it going from here."