Forbes Road put on an offensive onslaught in Wednesday's rout of Chestnut Ridge. Here are the best of the best plays from the 75-48 victory.

As the pages quickly fly off the calendar, area boys basketball teams are starting to look toward their postseason potential.

And after its third-straight blowout victory, Forbes Road is really proving itself as a team to watch in District 5 Class A.

Forbes Road, which has scored more than 70 points in each of its last three games, was ranked fifth in the week's District 5 power rankings with the top six teams advancing to the postseason.

The last time the Cardinals earned a spot in the playoffs was 2013-14.

"We want to try to sneak up to the No. 4 spot if we can and get that home court advantage," Forbes coach Trent Black said. "If that's not possible, that's why we play in the playoffs. We'll go wherever and see what happens from there." 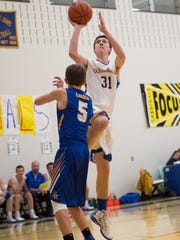 Here's the most interesting part about Forbes Road's recent surge, though: It's basically the exact same team as last season's.

The Cardinals did not graduate anyone from a year ago. After Wednesday's 75-48 rout of Chestnut Ridge, Forbes Road (9-5, 5-5 SHL) is just one victory away from matching its win total from the last two seasons combined.

"We had basically a JV team last year; we had only one real starter with (Aaron) Schepis," Black said. "We just didn't know how to win games, but this year, we finally have experience. We're really gelling as a team, and everyone seems to be stepping up and taking care of business."

A well-rounded offense has been a big key to Forbes' success. The Cardinals boast four players averaging at least 7.5 points per game. 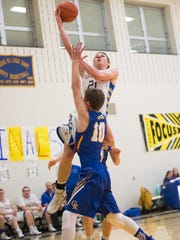 Brycen Hohman scored a career-high 29 points in Wednesday's win to push his average to 12.5 ppg, while Schepis follows right behind with 10.1. Matt Brown is averaging 7.8 ppg, and Grayson Hall contributes 7.5 ppg. The Cardinals have also had three others put up double-digit performances at least once.

"I just think we actually started to play as a team," Forbes Road's Brycen Hohman said. "We got our heads together and started playing well. Being well-rounded is very important because if one doesn't score enough, another one is able to pick everyone up. That's how we win."

Black said, "It's gonna take at least three guys getting in double figures for us to win a game. If we have only one guy scoring all our points, it's hard for us to win."

Forbes Road cheerleaders lift up Averi Chicolte, 5, in the air as they do a cheer during a boys basketball game played at Forbes Road on Wednesday, Jan. 25, 2017. Averi Chicolte's brother, Jackson Chilcote (2) plays for Forbes Road. Noelle Haro-Gomez, GameTimePA.com
Fullscreen 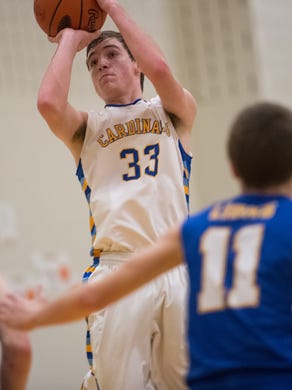 Defensively, Black and the Cardinals have also changed things up. Despite lacking a lot of size, Forbes Road's man-to-man defense has created havoc for many opponents. The Cardinals are allowing an average of just 47.2 points against.

"I think our defense has been fantastic compared to the way it has been," Black said. "Forbes isn't known for man-to-man, but I think we've changed that around here, and that's been a big factor. Everyone says Forbes can't play man, but I think we're proving otherwise."

Forbes Road has seemingly created a recipe for success, and it may surprise some postseason contenders.