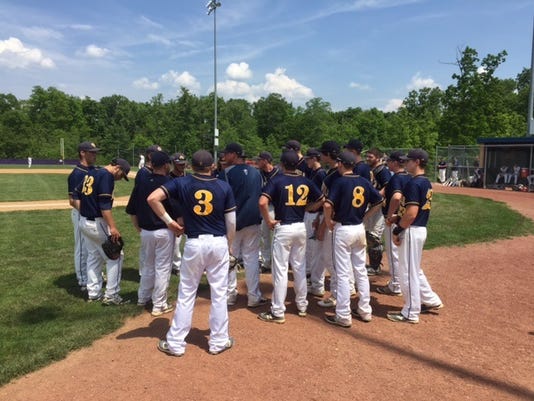 Shaner had told his players at the beginning of the season that if they focused and stayed in the moment, he thought they had the makings of a state championship team. With an 18-1 record, that certainly appeared to be the case.

But Greencastle needed one more win to qualify for states and it fell short Thursday afternoon in a District 3 Class AAA quarterfinal game, losing 6-3 to Bishop McDevitt (16-7). The Blue Devils were undone by five throwing errors, including three in the top of the third inning, when the Crusaders scored three runs to take a 3-2 lead.

"Even when we were behind, it didn't feel real that we would lose," G-A senior catcher Quin Ambeault said. "We've been behind before and made things happen ... but today was not one of those days."

Greencastle's best shot at a rally came in the bottom of the fifth, trailing 4-3, when the first two batters reached on a walk and an error. But Shawn Keller's attempted sacrifice bunt was popped up, Crusader catcher Cole Gerula caught it and doubled off the runner at second.

"That pop-up was a key play, especially mentally," McDevitt coach Steve Groff said. "They may have lost their confidence then."

The Blue Devils looked good to start the game. In the first inning, Matt Kline singled with two outs, moved up on two wild pitches and trotted home on a base hit by Ambeault. In the second, again with two outs, Dillon Morgan walked, stole second and scored on a hit by Myles Gayman.

"Even up 2-0 though, I thought we had already left a lot on the table," Shaner said. "We struggled to cash in on the opportunities we had."

Then came the ugly third inning. Jake Leibig led off with a single, moved up second on a grounder, then scored on a base hit by Joe Pensiero. With two outs, a short-hopped throw by the third baseman brought in Pensiero. On the next play, the same player threw high to first and it scored the third run.

Groff said, "Our goal was to work the count, especially with the heat, and put the ball in play. We did that early, but they made the plays. Then in the third they had those errors and that gave us the lead and some confidence."

Gayman singled in another run in the fourth to make it 4-3 and reliever Nathan Starliper held it there until the top of the sixth. With two outs and two strikes and runners on second and third, Starliper thought he had Pensiero out on an outside fastball, but it was called a ball. Pensiero then cracked a single to right to added two insurance runs.

Ambeault said, "We had heard that McDevitt wasn't the most skilled team, but that they would fight until the end. If a team isn't quite as good as another, but still are able to win, then that's impressive for them."

"We played really good defense most of the year," Shaner said. "But that's the danger of these games - this was the big one we needed to qualify for states, and we didn't get it done. We struggled to execute for maybe the first time all year."