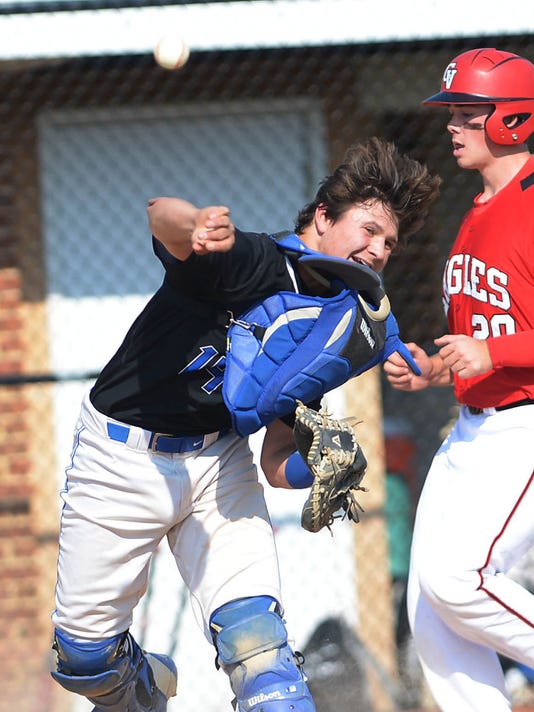 If not for a combined seven errors, Cumberland Valley and Waynesboro may very well have played baseball until sunset.

Such was the pitchers’ duel the teams found themselves in during Tuesday’s District 3 Class AAAA first-round game. But it was those very errors that swung the game in CV’s favor in a 3-2 win, setting the Eagles up with a quarterfinal against Exeter.

Waynesboro (15-6) committed all three of its mistakes in the deciding third inning, while CV (14-6) nearly undid itself in the seventh with three botched plays.

“Absolutely,” CV manager Levi Mumma said. “Fortunately for us it bounced away from them a couple times, but I know that’s really uncharacteristic of any Waynesboro team. We definitely had some luck on our side today.”

'Boro coach Greg Chandler said, “It’s a real close one because I thought their pitcher pitched a (good) game, too."

If not for the errors, it would’ve been a pitchers’ duel. Waynesboro's Kyle Hoffman went the distance, scattering seven hits and a walk while allowing no earned runs. Mitch Hoon went only 5 2/3 innings, but struck out seven Indians.

“Kyle had them off-balance all day with his curveball and fastball,” Chandler said. “And he gave us a chance to win - that’s all we expect him to do.”

Hoon took advantage of a generous strike zone, pounding the outside corner much of the day with a changeup. He mixed in a fastball that made Waynesboro swing late more often than not.

“The beginning of the game the strike zone was pretty big and the end of the game it got a little tight,” Hoon said. “But I loved it.”

Waynesboro spotted him the 3-0 lead thanks to sloppy defense in the third. Kyle Hooven reached on an error. After back-to-back singles to center by Zach Belansek and James Barber, Drew Baughman chopped a pitch that was mishandled, allowing Hooven to score.

Waynesboro got a run in the sixth when Francisco Maya reached on an error to score Peck.

An inning later the Indians nearly tied it when the Eagles’ defense had its own series of unfortunate events. A strikeout started the inning, but Derek Buhrman, Elliott Swink and Cody Cline all reached on consecutive infield errors to quickly load the bases.

But reliever Joey Cuomo got Hoffman to fly out on the defensive play of the game: a diving grab by Way on a dying fly ball into left field, allowing just Buhrman to score tagging from third. Cuomo then struck out Peck on a filthy backdoor curveball to end it.

“I knew (the defense) would come back,” Cuomo said. “They were gonna come up and pick me up, and my left fielder, Beck, did that.”

Chandler said, “Baseball is a humbling game, especially when you get to the end."