Gayman was Greencastle's top performer in 10-2 win over Waynesboro

Waynesboro's Jarrett Blescker throws the ball to his teammate on third base to tag out Greencastle's Tyler Haldeman during a baseball game in Waynesboro, Pa. on Friday, April 29, 2016. Greencastle defeated Waynesboro 10-2. (Photo: Noelle Haro-Gomez, GameTimePA.com)Buy Photo

The Greencastle-Antrim and Waynesboro baseball teams both had aces on the mound in a Mid Penn Colonial Division game Friday, but the cards dealt by Waynesboro couldn't match up against the Blue Devils' hand.

Greencastle showed a royal flush in a 10-2 win over Waynesboro, blasting 12 hits behind another quality outing by Myles Gayman to snap the Indians' five-game winning streak.

"It was a big time win against a great team who is playing very well," Greencastle coach Eric Shaner said. "I think the bats are really coming around. I was extremely impressed with the way things were coming around."

The bats came out right away for Greencastle, which put up two runs in the opening inning, working through nearly the entire batting order to get Waynesboro's Kyle Hoffman's pitch count up early. Waynesboro (9-3, 4-2 MPC) also committed nine errors in the ball game, and Greencastle (9-0, 6-0 MPC) capitalized with four unearned runs.

"We just didn't field the ball; you can't make that many errors against a good team," Waynesboro coach Greg Chandler said. "We just gave them too much."

Waynesboro found luck early as Gayman "experimented" with his approach in the opening innings. The Indians put up their only runs in the second to tie the game. Both of Waynesboro’s runs were unearned, extending Gayman's flawless ERA this season. Jarrett Biesecker bunted for Waynesboro, and a throwing error brought in two unearned runs.

But that was it for Waynesboro once Gayman decided to stop "tinkering" with his throw, and did what he does best.

"If the PIAA ever sees his curveball, they may outlaw it," Shaner said.

"Last game I had 13 strikeouts; for whatever reason I decided to switch up my mechanics, which was a bad idea," Gayman said. "After the second inning I just realized I should go back to what I was doing because that was working for me. Just stop thinking, throw the ball and good things happen."

Gayman struck out eight Indians, and he also helped his own cause in the leadoff spot. He went 4-for-4 with two RBIs, while Quin Ambeault went 3-for-5 with two RBIs. Waynesboro's Francisco Maya was 2-for-3 and scored once.

Greencastle is the only area team that remains undefeated.

"This was a really big game for us," Gayman said. "This was a needed win, and it made a big difference in standings. Going into this game, the record wasn’t on our minds, but after the game it’s something to celebrate, and move on to the next game."

A Greencastle athlete slides back into first base after trying to steal the base during a baseball game in Waynesboro, Pa. on Friday, April 29, 2016. Greenastle defeated Waynesboro 10-2. Noelle Haro-Gomez, GameTimePA.com
Fullscreen

Waynesboro's Jarrett Blescker throws the ball to his teammate on third base to tag out Greencastle's Tyler Haldeman during a baseball game in Waynesboro, Pa. on Friday, April 29, 2016. Greencastle defeated Waynesboro 10-2. Noelle Haro-Gomez, GameTimePA.com
Fullscreen 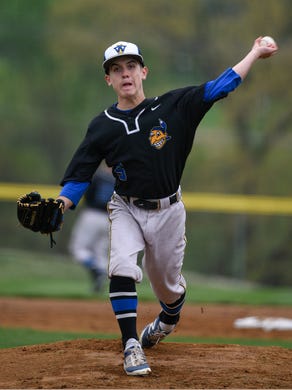 Greencastle's Derek Measell jumps in the air to catch the ball as Jarrett Blesecker of Waynesboro runs past first base during a baseball game in Waynesboro, Pa. on Friday, April 29, 2016. Greencastle defeated Waynesboro 10-2. Noelle Haro-Gomez, GameTimePA.com
Fullscreen

Greencastle's Derek Measell throws the ball back to the pitcher during a baseball game in Waynesboro, Pa. on Friday, April 29, 2016. Noelle Haro-Gomez, GameTimePA.com
Fullscreen