Clay Wolfe was strong on the hill and helped his own cause to lead Waynesboro to a 7-2 triumph over James Buchanan. 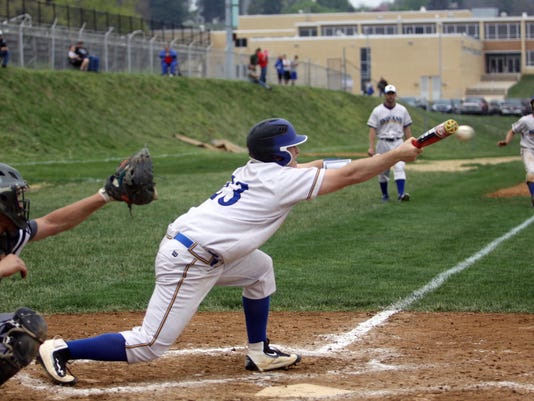 Waynesboro's Clay Wolfe lays down a bunt in a game against James Buchanan on Thursday. Wolfe was the winning pitcher in a 7-2 victory over the Rockets.(Photo: Courtesy of Sherry Cline)

Clay Wolfe was strong on the hill and helped his own cause with the bat in leading Waynesboro to a 7-2 baseball triumph over James Buchanan in Mid Penn Colonial action Thursday afternoon.

Wolfe tossed a complete game on 87 pitches (54 strikes) and four hits with five strikeouts and one walk.

"I felt good on the mound today and the guys were great behind me defensively," Wolfe said. "They made some big plays to give me a lift."

James Buchanan (3-5, 0-4 MPC) jumped out to a 1-0 lead in the top of the first without the benefit of a hit. Zach Vosburg led off by drawing the only walk Wolfe issued. He then stole second and advanced to third on a ground out. A ground out by Jared Pine plated Vosburg.

Waynesboro (7-2, 3-1 MPC) struck for three runs in the second with Kyle Hoffman knocking in a pair with a single and Cody Cline tacking on the other with a single. Wolfe then upped the lead to 4-1 in the third with a bunt single that scored Francisco Maya. 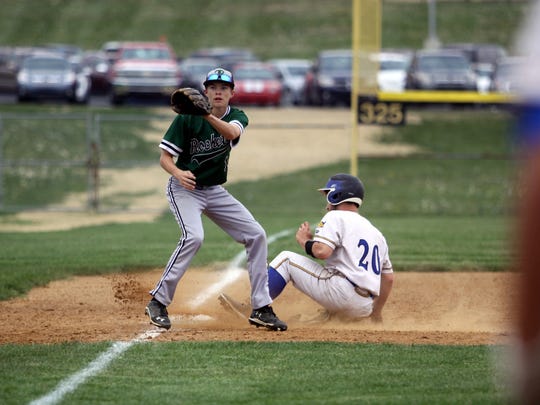 JB recorded a hit in the second, third and fourth innings, but was unable to scratch across a run.

"Clay really picked up the pace after we got him the lead," Waynesboro coach Greg Chandler said. "It gave him a little confidence and he mixed his pitches well."

'Boro twice more in the fourth as the lead climbed to 6-1 when Cline grounded out to score Nick Irizarry and Hoffman beat out an infield single to plate Elliott Swink.

"The offense has been doing well all season," said Wolfe, who retired 10 of the final 11 hitters of the game. "They came through big a couple of times today."

"Their pitcher did a good job of making us hit his pitch," JB coach Dave Sanchez said. "Their defense played great. We left too many runners on base and they cashed in their chances."

The win was the Indians' third straight, while JB has dropped five in a row since starting with three straight victories.

"We had a tough loss in the last inning to Greencastle (6-5 on April 14) and we haven't been the same since," Sanchez said. "We've got some things that we need to improve on to get this turned around."