Greencastle-Antrim's Myles Gayman unleashes a pitch in a game against Shippensburg on Tuesday. Gayman fired a two-hitter in the Blue Devils' 2-0 victory.(Photo: Lizi Arbogast, GameTimePA.com)Buy Photo

Sometimes in a pitchers' duel, it comes down to one thing - whose defense backs him up better.

On Tuesday afternoon, Greencastle-Antrim and Shippensburg both got gems from their baseball aces, but one's defense had just one, non-costly blemish. The Blue Devils scored a pair of unearned runs, while shutting down the Greyhounds in a 2-0 Mid Penn Colonial Division game.

G-A coach Eric Shaner said his ace, Myles Gayman, looked "effortless," which was a perfect way to describe Gayman's game. The senior fanned 13 batters in the complete-game effort and allowed only two hits and one walk.

"I didn't use my changeup at all, but I had all my pitches working during the game," Gayman said. "I'd say just getting ahead really helped me the most because my first two starts, I didn't do that too well. I had to stay on top and keep them guessing in the box."

Shaner said, "I'm really glad that I don't have to hit against him or figure out how to score runs against him. Because when he's on like that, it just looks like he's going through the motions. He's blessed with one of those rare gifts; you can't teach it, but I'm glad he lives in Greencastle."

His counterpart, Noah Auman, had no reason to be disappointed in his effort. In six innings of work, Auman gave up just three hits and neither of his runs allowed were earned.

"Noah pitched an outstanding game today, and he did everything he could to give us a chance to win the game," Ship coach Nate Rosenberry said. "Defensively, we gotta make those plays, but we improved there as well today." 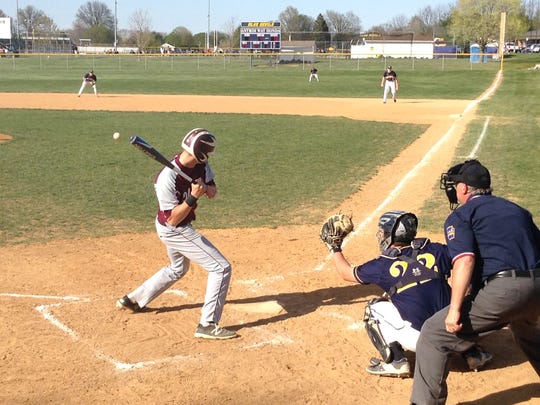 Shippensburg's Teagan Staver waits for a pitch in a game against Greencastle-Antrim on Tuesday. The Blue Devils claimed a 2-0 victory. (Photo: Lizi Arbogast, GameTimePA.com)

Greencastle (6-0, 3-0 MPC) scored in the first inning on an RBI single from Dillon Morgan and added its second run when Quin Ambeault smacked a hard ball to third base. It was misplayed, giving Austin Branchman time to score an insurance run.