The Huskies scored 2 runs in the top of the eighth inning to defeat the Trojans. 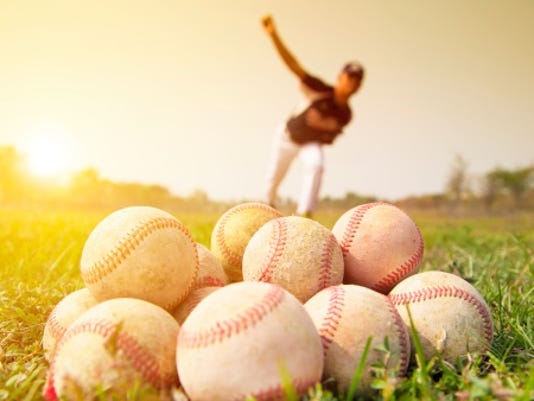 SCOTLAND -  Mifflin County's Isaiah Kearns went the distance on the mound to lead the Huskies to a 3-1 victory in eight innings over Chambersburg in Mid Penn Commonwealth Division baseball action Thursday afternoon at Greene Township Park.

Using a high 80's fastball and a sharp-breaking curveball, the University of West Virginia recruit allowed one unearned run and three hits with 10 strikeouts and two walks.

"I was ready to go today," Kearns said. "My fastball command was good. I was able to hit the corners with it and mixed my pitches well."

Chambersburg (1-1, 1-1 MPC) had a chance to win the game in the bottom of the seventh following Hunter Brindle's leadoff double that fell just inside the leftfield line. But Kearns sandwiched a pair of strikeouts around a ground out to get out of the jam and send the contest to extra innings.

Kearns then started the winning rally for the Huskies by drawing a walk to begin the eighth. A single and a hit-by-pitch loaded the bases, then Eddie Hamman hit into a fielder's choice to score Kearns and a squeeze bunt by Ty Bodtorf upped the lead to 3-1.

"We were a little bit more opportunistic than they were today," Mifflin County coach Bernie Howard said. "Isaiah was on top of his game. He had his good stuff, kept his pitch count low and that allowed him to stay in the game."

In the bottom half, Chambersburg's first two hitters were retired before a pair of errors gave the Trojans a chance, only to have Kearns finish the game by recording a strikeout.

"We did a good job of battling, but we didn't cash in when we had some chances," Chambersburg coach Scott Folmar said. "Their pitcher is tough. Hats off to him - he threw a very good game today."

The Trojans broke on top in the bottom of the first when Brindle's ground out plated Hayden Kissel, who had walked to lead off the inning.

Mifflin County (2-0, 2-0 MPC) tied the game in the top of the second on Peyton Reesman's sacrifice fly.

Cam Flinn worked the first five frames on the hill for the Trojans and allowed one run and three hits with one strikeout and three free passes.

"Cam pitched great for five innings today," Folmar said. "He pitched out of a few jams and gave us a chance to win the game."

Chambersburg returns to action Friday when it hosts Waynesboro at 4:30 p.m. The Trojans will honor former head coach Bob Thomas with a pre-game ceremony.