The Chambersburg baseball team was guaranteed to have plenty of changes this spring.

In addition to graduating five starters and two key pitchers, the Trojans are playing for the first time in 51 years for a coach other than Bob Thomas, who retired last August.

So it's not a surprise that the team will look much different under new coach Scott Folmar.

The most noticeable change may be in the style of offense Chambersburg expects to play. Folmar wants his team to play more small ball.

"In high school, generally you don't see guys hitting home runs very often," Folmar said, "and that's why we need to play small ball. I think we have the speed for guys to bunt for base hits and we need to use all that to our advantage."

Centerfielder Manning Brookens said, "We have shown a lot of energy and pace, and I think the offense is as good if not better than last year. We're playing a different style, but this group is different. We have good speed and a lot of contact hitters, so this should work better for us." 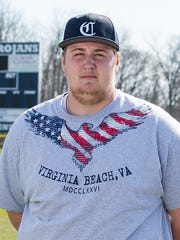 Folmar said, "I expect us to bunt and hit-and-run more often. And we have guys who can steal a base, so we have to be able to utilize that."

Brindle, a senior, hasn't pitched since his freshman season, when he was 1-1 with a 2.97 ERA and 18 strikeouts in 18 innings before tearing his labrum. The left-hander will open as the No. 2 hurler behind Suders.

"I'm pretty excited to see how this goes," Brindle said. "I started pitching again last summer and in the fall. I didn't really have to stop pitching, but there was some pain and I had to take longer breaks between each outing. But I'm good to go now; it's just a matter of how I feel."

The Trojans' other pitchers will be Chance McClure - who could be the top reliever, or be dropped into the rotation - Cam Flinn (7 inn., 8 hits, 7 K, 2.00 ERA), Kaden Hoover and Brenton Byers.

Folmar said, "Other than a scrimmage (Wednesday) and some intrasquad games, we haven't had much live pitching. Especially early, we may have guys go just two or three innings and then put somebody else in until we get our arms built up. We just want our pitchers to throw strikes and let our defense do the rest."

The rest of the projected starters for Tuesday's opener at Central Dauphin include Hayden Kissel (1-for-7, 2 SB) at third base, McClure at second base, Bryce Kendall at catcher, Hoover in right field and Kevin Carbaugh (.318, 2 RBIs) in left field. Dakota Bitner will play second when McClure is pitching and is pushing him for playing time.

"Competition breeds success, so it's good to have that competition," Folmar said.

The new skipper, three weeks into his first year with the Trojans, might not have stopped smiling yet.

"As you can tell, I'm really excited," he said. "It's been great so far. We've been able to get outside almost every day and the kids have been working really hard. In the three weeks of practice they've had a lot of energy - that's what we wanted from them and that's what they've done."