Check out the best matchups this week around Franklin and Fulton counties. 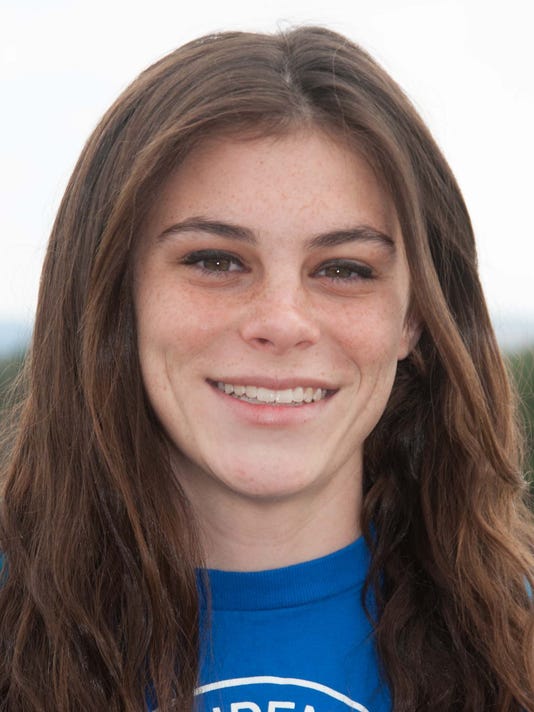 Monday, Fannett-Metal, Southern Fulton at McConnellsburg, track & field, 5:30: The all-Fulton County track & field tri-meet will bring together the top runners and field athletes in the area. Southern Fulton brings the area's best female hurdler in Celina Merchant, while the best female sprinter in the area, McKenzie Gelvin, will compete with McConnellsburg. She is also proving to be one of the top long jumpers, even though it is her first year competing in the event.

The Spartans also bring a threat to the field, with Connor Johnson, who claimed second in the shot put at the Shippensburg University H.S. Invitational on Saturday. 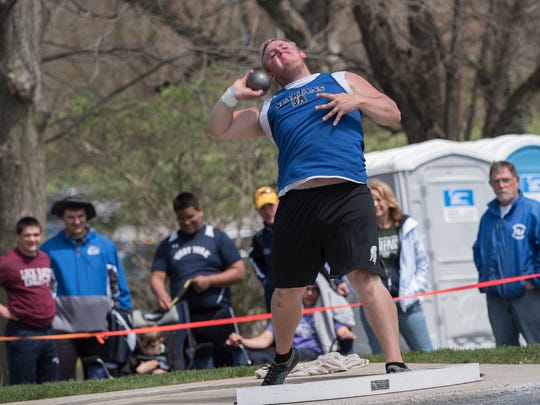 Tuesday, Mifflin County at Chambersburg, softball, 4:15: Tuesday may prove to be a potential battle for the Mid Penn Commonwealth Division crown. Now that Chambersburg's undefeated ride has come to an end, Mifflin County has a chance to dethrone the Lady Trojans - or at least scoot up there with them. The Huskies sit at 8-2 with a 6-2 division record - good for a tie for second in the MPC with State College, while Chambersburg holds on to first place in the division with a 9-1 overall record and 7-1 in the MPC thanks to a loss to Central Dauphin on Thursday.

But while Chambersburg's recent loss might intrigue Mifflin County with the potential of a Chambersburg slump, you can't count the Trojans out just yet. With four solid pitchers and power at the plate, it's going to take a lot more than just momentum to hand Chambersburg another loss this season.

Chambersburg's softball team in the dug out watch and shout out to their teammates during a softball game on Friday, April 22, 2016 in Shippensburg, Pa. Chambersburg defeated Shippensburg 8-1. Noelle Haro-Gomez, GameTimePA.co
Fullscreen

Kirsten Pugh tries to slide into the base before being tagged out by a Shippensburg player during a softball game on Friday, April 22, 2016 in Shippensburg, Pa. Chambersburg defeated Shippensburg 8-1. Noelle Haro-Gomez, GameTimePA.co
Fullscreen

Tuesday, Shippensburg at James Buchanan, softball, 4:30: Shippensburg sits in second in the Mid Penn Colonial Division standings, while James Buchanan is ranked fifth with just one league win this season. But it there's one thing we've learned about the MPC so far this year - anything can happen. The wonky league matchups this year have been anything but predictable.

The Rockets are coming off a tough loss to Waynesboro and have lost its last two divisional matchups, while Shippensburg has been relatively inconsistent after starting the season 4-0. The Lady Hounds have lost three of their last five games, but have also outscored opponents 20-4 in their two wins since the streak ended.

Thursday, Greencastle-Antrim at Waynesboro, baseball, 4:15: Waynesboro and Greencaslte close out their regular season series Thursday, as Greencastle tries to remain undefeated. Now 7-0, and 4-0 in the division, the Blue Devils sit atop the MPC, followed by Waynesboro with an 8-2 overall record and a 3-1 record in the division.

Last time these two teams clashed, Waynesboro put forth a good effort to rally in the seventh inning, with the game-tying runs on base after eliminating a six-run deficit early in the game. 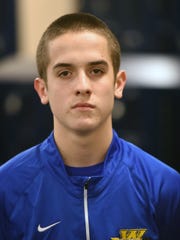 Waynesboro is on a hot streak itself. After losing two in a row, including the 7-5 loss to Greencaslte, the Indians have won their last four straight, led by Kyle Hoffman, who is 5-1 on the season.

Last year, one of the Indians' two losses in the regular season came from the hands of Meyersdale, and both enter the week with just one loss; and will each play two games before meeting Friday. Heading into Monday, Southern Fulton is 8-1 (8-1 SHL, 8-0 ICC).

Last week, Southern Fulton coach Dustin Fischer said the team played its most complete game of the season against Forbes Road, with hitting, pitching and fielding coming together at the right moment. 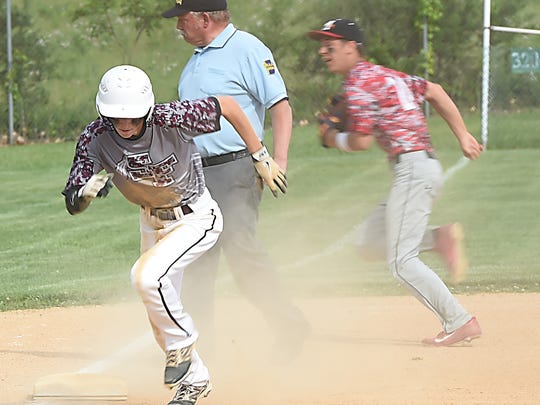 Southern Fulton Zach Clark, 8, scrambles from third base to score a run after a wild throw last year during the District 5-A baseball championship against Meyersdale. (Photo: File photo)