ALLY BROWN, Greencastle-Antrim softball: Brown was a threat for the Lady Blue Devils no matter where she was on the field in a 9-5 victory over Shippensburg. She threw a complete game and struck out five, and also knocked out two three-run home runs.

CHANCE HAWBAKER, McConnellsburg track & field: Hawbaker tied a 33-year-old school record in the 100, winning the race with a time of 10.8. He also won the 200 (23.3) and the high jump at 5-8 to lead the McConnellsburg boys team to a quad meet sweep.

KYLE HOFFMAN, Waynesboro baseball: Hoffman threw a complete game shutout twice this week, first in an 8-0 win over Shippensburg, and again in a 1-0 victory over Boiling Springs. He allowed just seven hits through 14 innings pitched.

KAYLEE MOWERY, Chambersburg track & field: Mowery claimed the gold in the 3,200 at the Tim Cook Invitational, finishing in 11:45.10, and was also part of the winning girls 4x800 relay race.

LAKEN MYERS, Chambersburg softball: Myers threw a three-hitter in Chambersburg's 6-1 victory over Red Land, and walked just two, a vast improvement from the nine base-on-balls she had against Cedar Cliff last week. She is now 4-0 for the undefeated Lady Trojans.

NATALIE NYE, Shippensburg track & field: Nye broke her own school record for the second time this year in the pole fault at 9-6. She also won the 800 with a time of 2:44, and anchored the winning 3,200 relay.

ISIUWA OGHAGBON, Mercersburg Academy track & field: Oghagbon took second in the shot put and the discus at the Tim Cook Invitational with throws of 34-5.75 and 119-10, respectively. 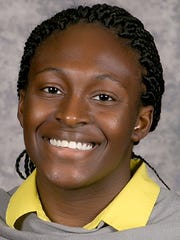 TRENT RIDER, Southern Fulton baseball: Rider improved his pitching record to 4-0 with a complete game shutout over Forbes Road, in which he struck out seven and allowed four hits.

ABBY ZEGER, Chambersburg track & field: Zeger was a three-time winner in Chambersburg's dual meet with Mifflin County. She won the long jump (16-0) and the triple jump (34-1), breaking her career best on both jumps, and also won the pole vault at 9-0..