Greencastle travels to Dallastown to take on Elco in Dist. 3-AAA quarterfinal 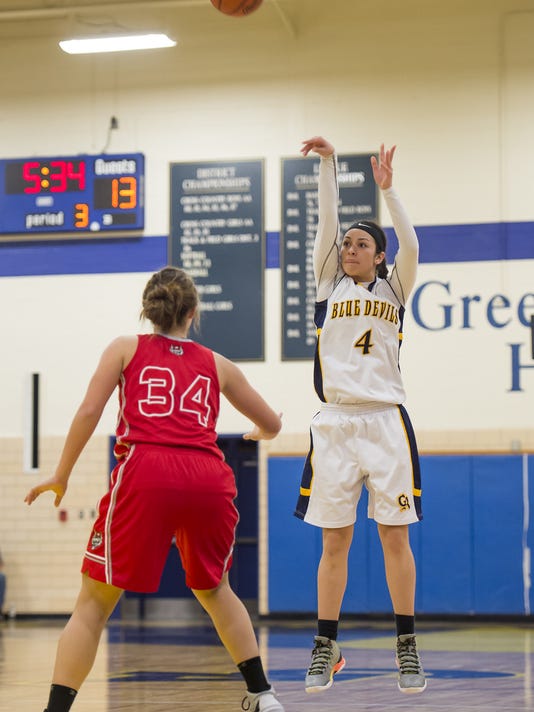 Jenay Faulkner (4) averages more than 20 points per game, and has made 83 3-pointers this season.(Photo: Noelle Haro-Gomez/GameTImePA.com)Buy Photo

The team's goal from the first day of practice was to make it back to Giant Center and to play on the biggest stage much of the team will ever play on.

But the Blue Devils have three wins to go, and three teams standing in their way, starting with Elco on Saturday at 6 p.m. at Dallastown in the District 3 quarterfinals.

No. 13 Elco punched its ticket to the quarterfinals with an upset win over No. 4 Susquehannock in a resilient 56-54 win, despite blowing a nine-point lead in the third quarter.

"I'm expecting a tight game. I don't put any trust in the rankings at all - just because there is a 13 next to their name doesn't mean they are any less of a team."

Elco (15-7) is led by a core of underclassmen, with freshman Ryelle Shuey and 5-foot-1 sophomore Bossert combining for 26 points in the first-round win. Senior Chandelle Keller, who averages 10.7 points per game, added 20 against Susquehannock.

Bossert could be the Raiders' biggest threat Saturday. Despite averaging fewer than 10 points per game, Bossert has hit 46 3-pointers this season, averaging two per game.

"We did see that she's a pretty good shooter," Rhine said. "But I think we will introduce her to Hannah (Crist) and try to negate that 3-point shot. She's the primary ball handler. She's their Hannah Crist. I love taking my chances with Hannah in that matchup. She knows, that's her cover and that girl cannot get into rhythm."

But compared to Greencastle's work beyond the arc, Bossert's contribution is dwarfed.

Teams: Greencastle is the reigning District 3 champion with a 21-2 record ... Elco, 15-7, shocked No. 4 Susquehannock in a first-round upset.